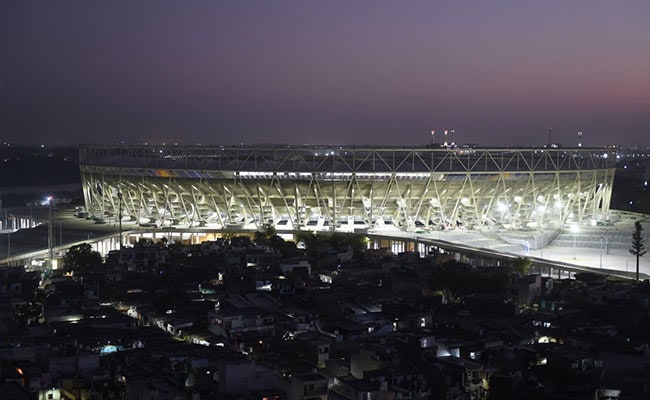 US President Donald Trump will open the world’s biggest cricket stadium in India next week, but critics wonder whether it’s just another vanity project by Prime Minister Narendra Modi in his home state of Gujarat.

Trump, not known as a cricket aficionado and on his first visit to India, will inaugurate the 110,000-seat Sardar Patel Stadium in Ahmedabad on Monday, a grandiose occasion that has drawn further attention to Gujarat.

The 700-crore, perfectly round venue, with seats in the blue and saffron of the Indian cricket team, promises unobstructed views from every angle and has facilities including four dressing rooms and an Olympic-sized swimming pool.

It eclipses the 100,000-seat Melbourne Cricket Ground, the venerable venue that dates back to 1853 and has hosted the greats of the sport through the generations, from Donald Bradman to Ian Botham and Sachin Tendulkar.

The new stadium is not the first record-breaking monument to independence hero Sardar Patel to be unveiled in Gujarat, PM Modi’s home state where he was chief minister until 2014.

Sardar Patel is immortalised by the world’s biggest statue, the enormous Statue of Unity which was completed in 2018 and measures 182 metres (597 feet) – twice the height of the Statue of Liberty.

Revamping the former Motera stadium was a pet project of PM Modi’s dating back to his time as president of the Gujarat Cricket Association, which is now led by Home Minister Amit Shah.

“It was a dream of Amit Shah and Modi-ji to build the biggest cricket stadium,” a senior Gujarat Cricket Association official, who asked to remain anonymous, told AFP.

“Now that we have the world’s biggest cricket stadium, I am sure the BCCI will set aside big matches including IPL (Indian Premier League) games.”

Mr Shah’s son Jay Shah is the secretary of the Board of Control for Cricket in India (BCCI), the world’s richest cricket board and the sport’s financial powerhouse, owing to India’s huge cricket market.

Although cricket enjoys massive popularity in the country of 1.3 billion, sceptics point out that India already has more than a dozen stadiums capable of holding international matches.

“We have seen with infrastructure, that you build it (and) it kind of becomes a white elephant and it’s not used as much as it should be,” veteran sports writer Ayaz Memon told AFP.

“Maybe they have done some research to find out what is the optimum number of people who will come there. But a one lakh (100,000) plus spectator (venue) is fairly substantial.”

Acknowledging concerns that the stadium would be under-used, the Gujarat Cricket Association official said PM Modi had made sure it offers facilities for other sports.

A refurbished ground next to the stadium – which is on the site of the the former 49,000-capacity Motera Stadium, built in 1982 – will serve as an all-sports venue for cricket, football and hockey.

Sports grounds in India are also often used for cultural and political events during off-seasons.

But observers questioned the need for another big stadium in India.

Be the first to comment on "As Trump Visits, Floodlight On 700-Crore Sardar Patel Cricket Stadium, World’s Biggest"