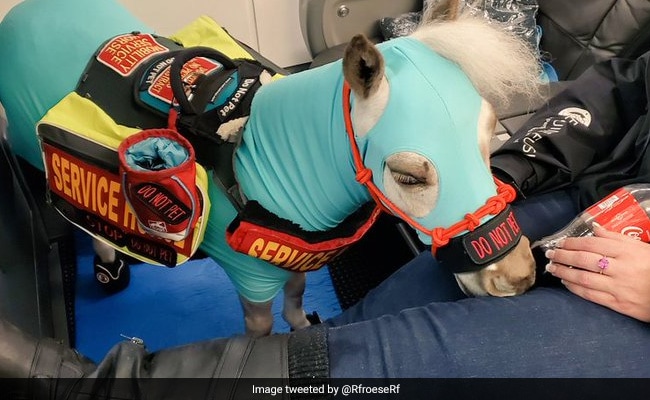 Ronica Froese was accompanied by her horse, Fred, on four flights.

The contentious debate around service animals being allowed on airplanes was ignited once again, thanks to the presence of a miniature service horse on a flight in the US. A Michigan woman recently surprised her co-passengers on an American Airlines flight when she travelled first class with her mini service horse.

According to the New York Post, Ronica Froese made the journey of February 7 with her horse Fred (full name Freckle Butt Fred.) The two departed from and returned to the Gerald R Ford International Airport.

“This was our first trip via an airplane. Fred has traveled several thousands of miles in my vehicle but this was the first time in the air,” Ms Froese said to Pix11.com. Fred, who lives in Western Michigan, is housebroken and a trained therapy and service horse.

“I spent a year of my life training this horse extensively for what he has, and I was totally prepared for everything,” Ms Froese said, adding that she paid for expensive first class tickets because she wanted her horse to be comfortable.

The Croton woman shared several photos and videos of Fred across the four flights they took together.

And we’re airborne again ✈ Dallas/Fort Worth here we come. #househorse#frecklebutt#evilearsjr#horseonaplane#firstclassbabypic.twitter.com/lrQNGgDgH7

On our last Flight headed home sweet home. Can’t wait to see my Dylan. I may be smiling but I’m exhausted and crabby. We are so tired. #househorse#frecklebutt#evilearsjr#teenietinyhorseproblems#miniservicehorse#mommyshelper#horseonaplane#firstclassbabypic.twitter.com/uGBzftrYtB

Thank you @AmericanAir@FlyGRFord@DFWAirport & Ontario International airport for an amazing first time experience flying. Thank you to all the flight crews, @TSA, and airport employees for your kindness towards us a miniature service horse team.
#frecklebutt#miniservicehorsepic.twitter.com/vZ9VSu0Xfk

In January, the US Transportation Department had announced plans to tighten the laws around “service animals” on plane – restricting them to only dogs, as opposed to the many species that passengers are currently allowed to bring on commercial flights.

Fred’s presence on the airplanes itself grabbed eyeballs and led to a spirited debate on Twitter:

Mini horses are certified Service Animals. They are better than dogs in many areas.

… a service horse, I dont mean to make light of people in need but this just seems excessive.
Why do we have to take everything too damned far.

Just don’t try to bring an extra carry on bag, but a horse? Of course!

In 2018, an emotional support peacock was denied a seat aboard a United Airlines flight at Newark International Airport, starting a similar debate online.

Where do you stand on this debate? Let us know using the comments section.