The humble hamburger rarely has a place in traditional fine dining, but for many top chefs it’s one of the food world’s greatest guilty pleasures.

It’s a simple dish that’s found everywhere and loved all around the globe. But where can you get the best one and what’s the secret to turning a handful of minced beef (or something else) and some bread into a delicacy? We asked the culinary elite – chefs laden with Michelin stars and other accolades – for their favorite burgers when they are having a sneaky time out from gastronomy.

Here are their picks.

This 24-hour, hole-in-the wall joint with a counter and stools is a favorite with chefs who enjoy its unfussy food with high-quality ingredients. The hamburger is a 120-gram beef patty with tomato sauce, pickles & mayo in a milk bun.

Butter is a hybrid sneaker, fried chicken and Champagne bar in Surry Hills. If that sounds an unlikely setup, it is the project of respected chef Julian Cincotta and the team from Thievery restaurant in Sydney. The OG Chicken Sandwich is not to be missed.

This is an outpost of a Sydney chain, with loud music, natural wines and an American vibe. Founders Jake Smyth and Kenny Graham favor local suppliers for their meat and wines, and big flavors. The cheeseburger is a must unless you’d prefer the vegan menu.

This homage to the classic American burger joint serves great food. The patties are made with Double Gold American beef from Wisconsin, served in a potato milk bun. The double cheeseburger is the signature option.

Fresh organic burgers are cooked at this walk-in joint, which is attracting attention far beyond Denmark. Housed in a former gasoline station, it has a short menu like a simple roadside grill. It’s worth going off piste with the vegetarian Green Burger.

As the name suggests, this Parisian restaurant serves organic burgers and they are full of flavor. One favorite is Le Poivre: a choice of beef or vegetable patty with farmhouse cheddar, tomato, salad, onion jam and pepper sauce. It’s like eating steak au poivre on a bun.

This restaurant is located close to Les Halles, the daily market in Biarritz, from which the chefs source the freshest of produce. The buns are cooked to a special recipe and all the sauces are homemade, says Paris-based chef Helene Darroze. Try Le Parm, with a Parmesan tuile, Mozzarella and arugula and pesto with sun-dried tomatoes.

Burgers don’t have to be about a chunk of meat. Try the Vada Pav at this popular vegetarian cafe. Fried potato dumplings are served in buttery soft buns and laced with sinus-clearing spicy chutneys and deep fried green chilis. Not for the fainthearted. 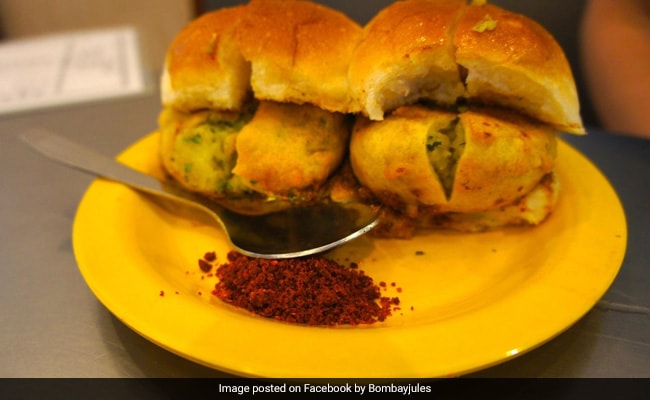 This pub in Sicily serves an excellent sausage burger with black olives, radicchio, stewed onion and Ragusano cheese, says Italian chef Ciccio Sultano, who holds two Michelin stars for his Sicilian haute cuisine. “It’s my go-to order if I am there,” he says.

This Japanese chain has been serving burgers adapted to Japanese tastes since 1972. Try the Rice Burger served with grilled beef, sweet soy and BBQ sauce between patties of compacted rice. The Kinpira Burger is a great vegan option.

The Cutlet Sandwich from Wagyumafia at Nakameguro station is made with thick-sliced pure Kobe beef, breaded and deep fried, sandwiched between two slices of Japanese milk bread with a secret house-made sauce. It harkens back to the original burger at Louis’ Lunch in New Haven, yet is distinctly Japanese, says three-Michelin star chef Kyle Connaughton. The prices are something else. The budget (Zabuton) version is 5,000 yen ($45.50) rising to 50,000 yen for the Kobe Champion.

The inexpensive charcoal-grilled burgers at this street stand near Pushkin Garden are world class, according to Mexican chef Enrique Olvera, whose Pujol places at 12 in the current ranking of the World’s 50 Best Restaurants.

New Zealand chef Josh Emett is a big fan: “You will always remember you first Fergburger. First, there’s the long queue, and then the care taken to put them together so they are all picture perfect. I love a bit of avocado and bacon in anything and these burgers never disappoint.”

The Hamburguesa Cafe; A comes with coarse ground roast beef, caramelized onions, cheese and a secret sauce. “It is simple and it really is delicious,” says Gaston Acurio, one of the most highly acclaimed chefs in Latin America.

This casual Peruvian chain serves a great hamburger with double cheese, according to Virgilio Martinez, whose Central, in Lima, ranks at No. 6 in the World’s 50 Best Restaurants. “It has a delicate Peruvian touch of acidity if you add the sauces they suggest – a bit spicy,” he says.

You don’t immediately think of hamburgers at Maido, which has been crowned Latin America’s best restaurant for three years in a row. But London-based Sanjay Dwivedi remembers being served a steam bun filled with slowly cooked belly pork, aji rocoto mayonnaise and salsa creole. “It was a match made in heaven,” he says.

One O’ One, Riyadh

An Italian chef admits his expectations were low when he was taken to this burger chain in Riyadh. But he was won over by a small cheeseburger that was so good, he immediately ordered another and then went back the next day. “It was so juicy,” he says.

This inexpensive burger bar near the castle in central Ljubljana is a hit with both tourists and young Slovenians. Ana Ros, a winner of the World’s Best Female Chef accolade, likes to go there with her kids. All the meat is aged and cut in-house.

This new joint in suburban Linden is the first of actor and TV celebrity Maps Maponyanes. It has attracted a lot of media attention. There are about a dozen burgers, including vegetarian and vegan options. Quirky names include, Is It Brie You’re Looking For?

The Basque city is known for the “pintxos” (small bites) served at informal bars, and chef Elena Arzak goes for the burger pintxos served at A Fuego Negro, where she is a regular. “It is original and unexpected,” she says.

London-based Nieves Barragan fondly recalls the food at this family restaurant in Bizkaia. “It was an elderly lady selling the best burgers – I think she’s handed over to her son now. The burger is like a steak bocadillo . It’s so light, you could eat two.”

This bar serves a wide range of burgers, including tuna and vegan options. But London-based Jose; Pizarro recommends the Americana, with aged beef, ketchup, lettuce, cheddar and tomato. “It’s nice and simple but really delicious,” he says.

Restaurateur Scott Collins is a hero among burger fans for his MEATliquor restaurants. But his pick is an unusual one: A native lobster slider with yuzu aioli and pickled shallot. “Expensive, small, perfectly formed and eats as good as it reads,” he says.

“I am not a massive burger fan,” two-Michelin-star chef Clare Smyth admits, but she makes an exception for an American import, Eggslut, on Portobello Road. “They have a great menu, with the cheeseburger being a bit of a favorite,” she says.

Shake Shack CEO Randy Garutti is one of the most admired men in the burger business. So where does he go other than the Shack? “I love hitting the bar at Hawksmoor for their burger,” he says. “So many good ones to choose from.”

“I love going to Honest Burger, Brixton Market, with my twins at least once a month,” Sanjay Dwivedi says. “I love the simplicity of the restaurant and their consistency. It is innovative and their burger of the month is my preferred choice.”

“MEATliquor burgers are best,” says London-based Spanish chef Nieves Barragan. They use quality ingredients and the burgers just taste incredible. The Green Chilli Burger is my usual order, or the Dead Hippie if I want something classic.”

This home-grown British chain was born in 2012 and now numbers three-Michelin-star French veteran chef Pierre Koffmann among its fans. “I go there with the kids and it is always good,” he says. He loves the Ari Gold Cheeseburger on brioche.

The London outlet of this US steak restaurant chain has a fan in one of the rising stars of London gastronomy, Ollie Dabbous. “Definitely the Butcher Burger,” he says. “This is done just about as well as it can be: The brioche buns are even baked in-house.”

This is one of the most fashionable restaurants in London and has been since the day it opened in 2003. Italian chef Francesco Mazzei keeps going back for the Wolseley Hamburger. “It’s the most perfect burger,” he says. “It makes you happy.”

This diner, with outlets in New York and Chicago, is famous for its cheeseburger. Peruvian chef Gaston Acurio, who orders the double, says: “It’s got layers of good cheese, with a delicious thick piece of bacon and an egg. It’s succulent and elegant at the same time.”

This cash-only speakeasy-style joint hidden beside the lobby in the Parker Meridien is legendary. It’s dark and moody with great music and for many chefs it is among the coolest in New York. Jamie Lee from Copenhagen says you can’t go wrong with the cheeseburger.

French-born Daniel Boulud is famed for his luxury DB Burger, filled with braised short ribs, foie gras and black truffle. “DB in NY is excellent and a bite that you will always remember,” says Spanish chef Elena Arzak. French chef Pierre Koffmann is another fan.

This American chain is expanding internationally and has caught the attention of some of London’s finest chefs. Claude Bosi, who holds two Michelin stars, says: “I like the choice of toppings and the meat has good flavor. But the chips are the best.”

Chefs love this regional chain founded in California. Claude Bosi praises the great meat patty, light bread and brilliant shakes. “A trip to In-and-Out burger is always a must,” says New Zealand chef Josh Emett, who goes for the Double Double, made with two cheese-topped patties. It’s the same for Randy Garutti: “If I’m in LA, I’ll snag a Double Double.”

Japanese chef Hisato Hamada likes to visit Joe Junior when he is in New York. “I order the beef without cheese,” he says. “For me, the beauty of this burger is in its simplicity. I like that it is unchanged and has a classic soul. It is my definition of America.”

The Dirty Burg is the best burger in the States, Kyle Connaughton reckons. “It’s an incredible blend of chuck, short rib and back on the patty with a soft, absorbent bun loaded with sesame seeds, grilled onions, cheese, house-made pickles, and onion mayo,” he says. “For me, it’s the burger all others are measured by.”

Chef Daniel Boulud enjoys the A-5 Wagyu Burger on the brunch menu at Grant Achatz’s Roister in Chicago. “It’s a delicious combination of fatty beef, aged cheddar and smoked bacon,” he says.

It’s a rare chef who is not a fan of Shake Shack, where restaurateur Danny Meyer raised the bar for burgers. “It’s my favorite,” says French chef Greg Marchand. “I always go for the SmokeShack (double stack of course) and I also love their cheesy crinkly fries. “I love Shake Shack!” says Thailand’s Thitis Tassanakajohn. “It’s so addictive,” says Jason Atherton.

Here’s one for the vegetarians, with many vegan options. The Superiority Burger features Muenster cheese, iceberg lettuce, tomato, dill and pickle. Superiority is the creation of chef and musician Brooks Headley, former pastry chef at Del Posto.