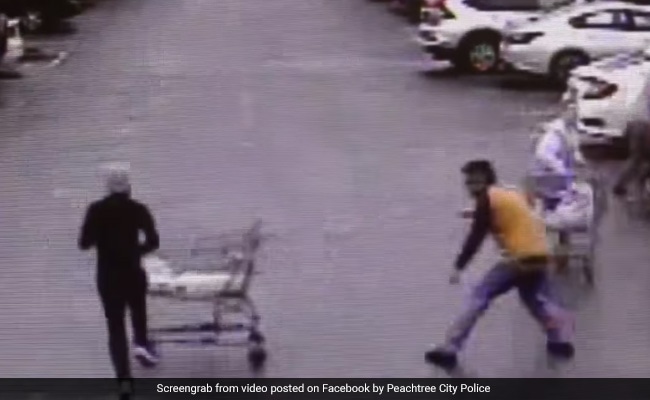 A Good Samaritan helped police catch a shoplifter in Georgia.

A man in Georgia, US, is being praised for his quick thinking in pushing a grocery cart in the way of a shoplifting suspect on the run, thwarting his escape bid. According to CNN, the incident occurred last month when Peachtree City Police responded to a call about two men attempting to shoplift at a Home Depot outlet in the city.

When police officers approached the two men in the parking lot, they attempted to flee the scene. That is when the Good Samaritan, who has not been identified, pushed his grocery cart in front of one of the suspects, sending him tumbling to the ground and allowing cops to catch up with him.

Footage released by the Peachtree City Police Department last week shows the Good Samaritan in action. Police said they were thankful for the citizen’s quick thinking but asked people to avoid intervening in a police situation.

“Again, while we are eternally grateful for this citizen’s quick thinking and impeccable timing, we never encourage anybody to intervene in a police situation,” wrote the police department while sharing the video.

“Thank you shopping cart guy, and then PTC Police!” wrote one person in the comments section. “Still love his quick decision and aim,” said another.

Fox News reports that police later identified the shoplifting suspect as Marcus Smith. The 41-year-old was charged with felony shoplifting and obstruction. The other suspect managed to escape in a vehicle.

Be the first to comment on "Man Takes Down Shoplifter With Grocery Cart During Police Chase. Watch"