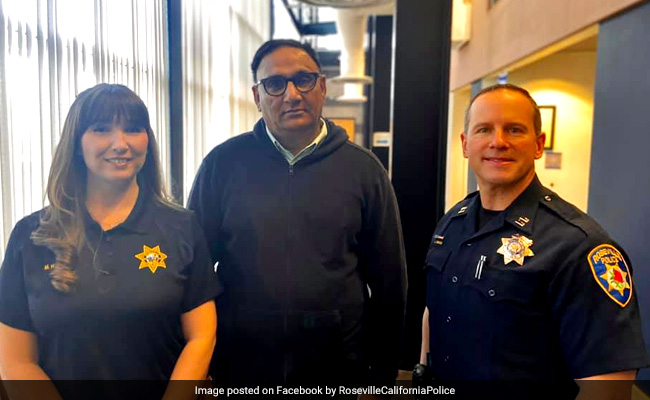 Rajbir Singh received a $50 gift card as a thank you from the police.

A taxi driver is California is being hailed for saving an elderly woman from being scammed out of $25,000 (approximately Rs 17 lakh). Rajbir Singh, the owner of Roseville Cab, was called to pick up a 92-year-old woman from her home in Sun City, Roseville, about two weeks ago.

According to the City of Roseville Police Department, Mr Singh figured out something was fishy when the woman told him that she was headed to the bank to withdraw $25,000, which she needed to settle her debt with the IRS. The IRS or the Internal Revenue Service is the government agency responsible for the collection of taxes.

“This sounded very suspicious to Raj so he suggested to the woman, this may be a scam,” said the police department in a Facebook post.

However, the woman seemed doubtful of Mr Singh’s claims, even as he kept asking her to reconsider. According  to CNN, he even called the number of the person who was posing as an IRS employee.

“We called this number again and I asked the man, ‘Do you know this lady?’ He said no,” said Mr Singh. “I knew something was wrong.”

The man on the other end hung up on Mr Singh and, after repeated calls, blocked the number. Despite that, the unnamed woman did not believe him.

Finally, in an effort to convince his passenger, Rajbir Singh offered to take her to a police station.

The cab driver made a detour and went into the police station as his passenger waited in the cab. “He waited for a while but finally was able to speak with an officer who then spoke with the woman waiting in the cab. Sure enough, it was a scam,” wrote the police department.

After talking to a police officer, the woman believed that she was being scammed and decided not to pay the scammer. She was then taken back home by Mr Singh.

“We love this story because several times throughout, Raj could have just taken his customer to her stop and not worried about her wellbeing. He took time from his day and had the great forethought to bring the almost-victim to the police station for an official response,” said the City of Roseville Police Department.

Along with more than 2,000 ‘likes’, the Facebook post has garnered a number of comments praising Rajbir Singh.

“Thank you! Such a good story! So many older people get taken advantage of,” said one commenter. “Super!! What a good deed he did!” another wrote.

“I am an honest guy, and these are old people. They need help,” Mr Singh said to CNN. “It just made sense.”

Police gave Mr Singh a $50 gift card to thank him.

Be the first to comment on "California Taxi Driver Rajbir Singh Saves Elderly Woman From $25,000 Scam"