The Supreme Court asked government to call officer to court.

A “desk officer’s” letter asking that no coercive action be taken against telecom companies for not paying dues was the trigger for the Supreme Court’s furious tongue-lashing for the government and a notice to telecom companies for contempt. The top court also summoned the officer besides telecom bosses over non-payment of dues of Rs 92,000 crores towards Adjusted Gross Revenue (AGR).

“Should we wind up the Supreme Court? A desk officer considers himself judge and stays our order. Who is the desk officer? A desk officer says coercive action not to be taken until further orders. How can he stay our orders,” Justice Arun Mishra demanded of the government, represented by Solicitor General Tushar Mehta.

The letter that the court referred to, written last month, was titled: “No coercive action to be taken against telecom service providers in relation to AGR dues”. 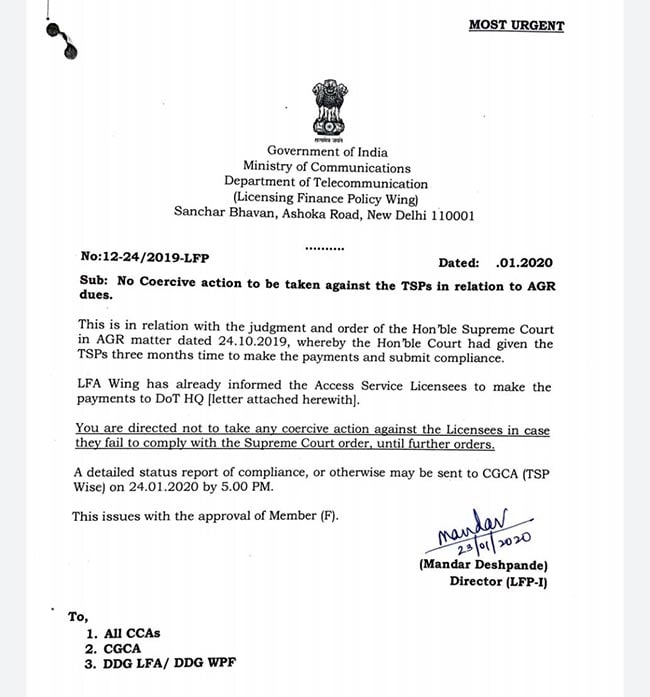 The judges said the letter was nothing but a devise to oblige the companies.

It was signed by Mandar Deshpande, Director in the Department of Telecom, who wrote: “You are directed not to take any coercive action against the licensees in case they fail to comply with the Supreme Court order, until further orders.”

The Supreme Court asked the government to call the officer to court and questioned what action was being taken against him. A desk officer, the judges said, was writing a letter to the Attorney General and other constitutional authorities saying they should not insist on payment of money by telcos.

Justice Mishra said his judicial conscience was shaken. “Is there anything left in the judiciary? I am at a loss. I will not bother about myself. I will pass strictures. I am totally at loss how to work in this system and in this country,” he said.

The judges said the letter was nothing but a devise to oblige the companies.

Questioning whether “money power” was involved in the officer’s move, the court also said he was liable for contempt and could go to jail.

Be the first to comment on "This Letter By Department Of Telecommunications To Telecom Bosses Enraged Supreme Court, Judges Talked Of Leaving Country"