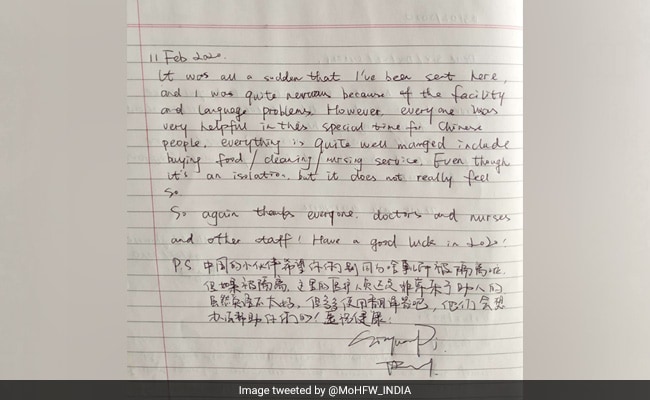 Amid global health scare over the deadly coronavirus, which has killed over 1,400 people in China in the last few weeks, the Health Ministry today tweeted a thoughtful note by a Chinese citizen isolated in Pune over suspected infection.

“Caring for all! Thoughts of a Chinese national who was isolated in Naidu hospital in Pune on exhibiting symptoms of #COVID19. #HealthForAll #HelpingAll,” the post, which had a picture of the handwritten note, read.

In the note, dated February 11, the Chinese citizen, who has not been identified, described the experience of landing in India amid widespread alert over coronavirus. “It was all of a sudden that I have been sent here (Pune) and I was quite nervous because of the facility and luggage problems,” it reads.

Thoughts of a Chinese national who was isolated in Naidu hospital in Pune on exhibiting symptoms of #COVID19.#HealthForAll#HelpingAllpic.twitter.com/gj9ns7Ay2a

“However, everyone was quite helpful in their special time for Chinese people. Everything is quite well managed include buying food/ cleaning/ missing service. Even though it’s an isolation but it does not feel so,” the note further read.

The Chinese citizen concludes by thanking “everyone – doctors and nurses (at the hospital)”, adding a postscript in Chinese. The signature at the end of the letter is not legible.

In China, health crisis due to coronavirus outbreak – declared a global health emergency by the World Health Organization (WHO) – has deepened with nearly 64,000 people infected.

While the WHO has praised Beijing’s handling of the epidemic — in contrast to its cover-up of the SARS outbreak in 2002-2003 — the United States complained of a “lack of transparency” from the east Asian country.

More than two dozen countries have now reported hundreds of cases among them.

In India, three cases were reported in Kerala. All of them are students who returned from China’s Wuhan city, epicentre of the outbreak, last month. One of them has now been discharged after she tested negative for the infection in latest tests.

Tens of thousands of passengers have been screened across the airports in the country in the last few weeks. On Thursday, Union Health Minister Harsh Vardhan claimed that the situation in the country was being monitored Prime Minister Narendra Modi himself.