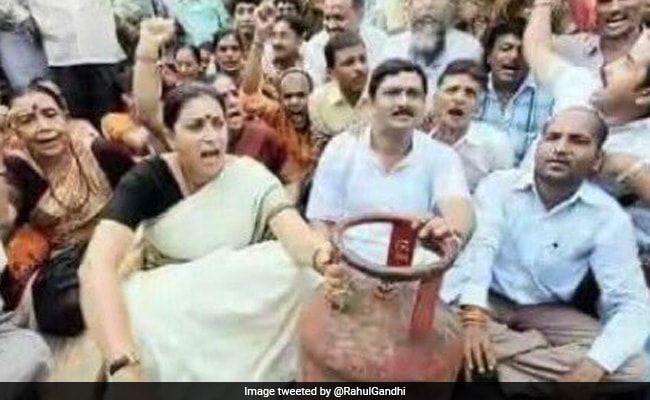 Rahul Gandhi tweeted an old picture of BJP’s Smriti Irani to take a swipe at the ruling party.

Congress leader Rahul Gandhi this afternoon tweeted an old picture of Union Minister Smriti Irani and took a swipe at the ruling BJP over increase in cooking gas prices on Wednesday, steepest since January 4, 2014.

“I agree with these members of the BJP as they protest the astronomical 150 Rs price hike in LPG cylinders,” the 49-year-old Congress leader wrote and shared an old picture where Ms Irani is seen protesting against the Congress-led UPA government over increase in prices of LPG cylinders.

He posted the tweet with the hashtag ”RollBackHike” to take a potshot at the 43-year-old BJP leader, who defeated him in Congress stronghold Amethi in last year’s national election.

On Wednesday, cooking gas LPG price was hiked by Rs 144.5 per cylinder after a spurt in benchmark global rates of the fuel. This is the sixth consecutive upward revision since September.

I agree with these members of the BJP as they protest the astronomical 150 Rs price hike in LPG cylinders. #RollBackHikepic.twitter.com/YiwpjPdTNX

Currently, the government subsidises 12 cylinders of 14.2 kilograms each per household in a year. The consumer has to make any additional purchases at the market price.

Hitting out at the government over the hike, Congress spokesperson Randeep Surjewala on Wednesday said, “Modi ji increased the price of LPG cylinder by Rs 144. Cooking gas price has been increased by Rs 200 in 1 year from 2019-2020.”

“While talking about current, they have struck the pockets of the public with current,” he tweeted in an apparent reference to Home Minister Amit Shah’s remarks during the election campaign in Delhi on epicentre of protest against Citizenship Amendment Act or CAA. “Press the button so hard that protesters in Shaheen Bagh feel the current,” Mr Shah had said, a comment that was criticized by AAP leaders after party’s massive win in Delhi assembly polls.

Today, All India Mahila Congress leaders, including Sushmita Dev and Alka Lamba, also held a protest outside Ministry of Petroleum and Natural Gas office against the price hike.