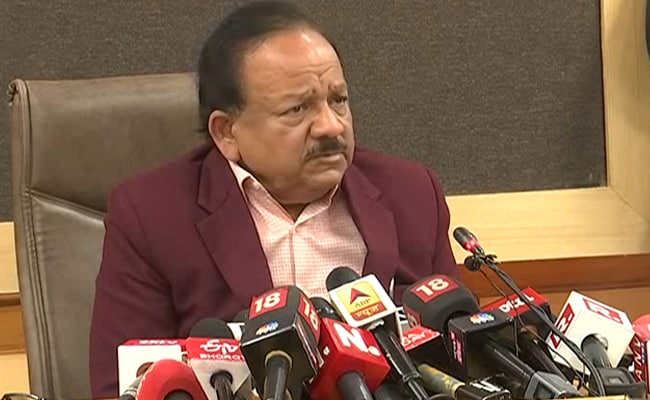 Harsh Vardhan said the government was taking every precaution against the virus.

A day after Congress leader Rahul Gandhi claimed that the centre was not taking the novel coronavirus threat seriously, Union Health Minister Harsh Vardhan today claimed that the situation was being monitored by none other than Prime Minister Narendra Modi himself.

“PM Modi is personally monitoring the situation in coordination with various departments. Every effort is being made to ensure that the virus does not make inroads into India. People coming in from six countries — China, Thailand, Hong Kong, Singapore, Japan and South Korea — are being screened at as many as 21 airports across the country,” the Health Minister said at a press conference in Delhi.

Harsh Vardhan’s assurance comes at a time when the number of coronavirus cases in neighbouring China has risen to 48,206. “We had started putting precautionary measures in place as early as January 17, much before the World Health Organisation termed it as a public health emergency of international concern. In an advisory issued back then, we had instructed states across the country to establish isolation beds, procure masks and put ventilators in place. We even sent out travel advisories in the initial days of the outbreak,” he told reporters.

While 1,310 have died of coronavirus in China so far, two more have been reported from Hong Kong and the Philippines. Of the three cases in India, all reported from Kerala, one has been discharged while the others are said to be in a stable condition.

Over 2.51 lakh people from as many as 2,315 incoming flights have been screened so far. However, only three of the 1,765 samples obtained from them have tested positive.

Harsh Vardhan also provided updates on the 645 Indians flown in from China’s Wuhan, regarded as the epicentre of the coronavirus outbreak. “According to reports coming in until February 11, all of them are in a stable condition. But we will continue to keep them under surveillance until there is no room for risk,” he said, adding that India is also extending aid to China on humanitarian grounds.

The condition of 160 Indian crew members aboard a British cruise ship quarantined off the Japan coast also came up at the press conference. “The Japanese government is dealing with them as per established protocols,” Harsh Vardhan said.

Congress leader Rahul Gandhi had alleged yesterday that the central government was not treating the coronavirus threat with due importance. “The Coronavirus is an extremely serious threat to our people and our economy. My sense is the government is not taking this threat seriously. Timely action is critical,” he tweeted.

Mr Gandhi’s claim drew a sharp reminder from Harsh Vardhan of the former’s status as “a senior leader and the son of an important leader”.