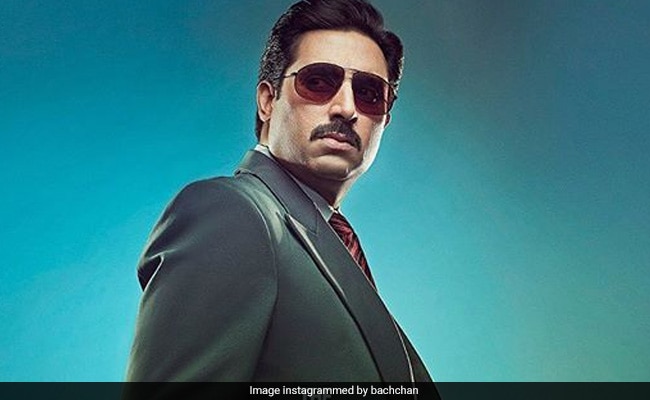 Abhishek Bachchan on a promotional poster of The Big Bull. (Image courtesy: bachchan)

Abhishek Bachchan just dropped a new poster of his forthcoming film The Big Bull on social media and it instantly fixed our mid-week blues. Days after releasing the first look of his new film, Abhishek gave his fans another glimpse of his look as a stock-broker and his intense expressions in the poster say it all. The actor, whose character in the film is reportedly based on that of stock-broker Harshad Mehta, can be seen sporting a grey suit, side-parted hair and brown shades in this new look poster of the film. In his post, Abhishek Bachchan also announced that his film will open in theatres on October 23rd this year. The new poster of Abhishek’s The Big Bull comes with this caption: “The Big Bull releases on October 23rd! Stay tuned.”

“Love your Swag! May you Bulldoze the box office!” commented director Milap Zaveri.

LOVE your Swag!!! May you BULLdoze the Box office!!! #TheBigBullhttps://t.co/LYPpa6qIrW

Directed by Kookie Gulati, The Big Bull will also feature Ileana D’Cruz and Nikita Dutta. Ajay Devgn is associated with the film as a producer. Abhishek Bachchan unveiled the first look of the film on January 2. He defined his character – The Big Bull – as “the man who sold dreams to India.” Take a look:

On the work front, Abhishek Bachchan will also be seen in Anurag Basu’s Ludo and Diya Annapurna Ghosh’s Bob Biswas.