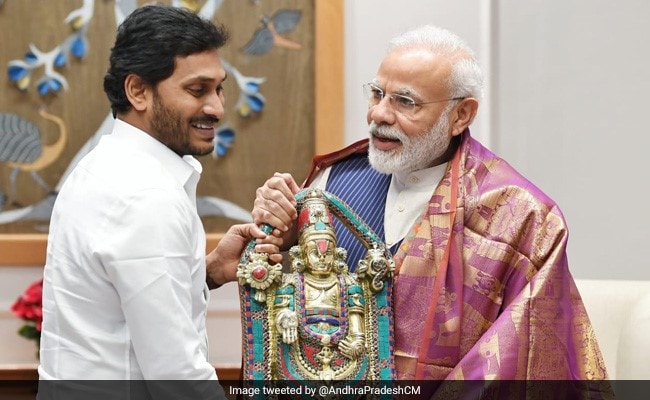 Andhra Chief Minister met PM Modi for over 100 minutes at his residence in New Delhi.

Andhra Pradesh Chief Minister YS Jagan Mohan Reddy on Wednesday presented his government’s case to Prime Minister Narendra Modi on a host of issues, including the plan to have three capitals for the state and the resolution to abolish the Legislative Council.

The Chief Minister also invited the Prime Minister to attend a programme in the state on March 25 (Telugu New Year’s Day Ugadi), wherein 25 lakh house-sites would be distributed to eligible families on a single day.

The Chief Minister, who air-dashed to New Delhi on a call from the Prime Minister’s Office, had a 100-minute meeting with him at his residence.

He presented a 10-point memorandum to the Prime Minister for expeditious action by the central government on issues related to the state, a press release from the Chief Minister’s office said.

Mr Jagan told PM Modi that the idea behind “three capitals for the state” was to ensure comprehensive development of all regions of the state by removing the imbalances in growth.

“In this direction, we have decided to decentralize the administration by locating the executive capital in Visakhapatnam, judicial capital in Kurnool and legislative capital in Amaravati.

The state cabinet has already approved this plan, while the Decentralisation Bill was passed by the state assembly, the release quoted Mr Reddy as telling the Prime Minister.

However, there was no mention about the legislative hurdle the Bill has been facing, as the Council decided to refer it to a Select Committee for further scrutiny.

But Mr Reddy complained to PM Modi that the Legislative Council was trying to block legislation brought in by the duly-elected government.

“In this backdrop, the Assembly passed a resolution with two-thirds majority seeking abolition of the Council.I request you to direct the Union Law Ministry to take further action in this regard,” Mr Jagan Reddy added.

He also requested the Prime Minister to direct the Law Ministry to initiate steps to shift the AP High Court to Kurnool, the proposed judicial capital, from Amaravati.

Stating that his government enacted the AP Disha Act-2019 for expeditious trial of sexual harassment and assault cases against women and children, with death penalty as the maximum punishment, the Chief Minister requested the Centre to give its consent to it.

Mr Reddy also took up the Special Category Status issue, revenue deficit grant, Polavaram multipurpose project,backward district’s development grant and the annual grants from the centre that were due to the state, the release said.

As the 15th Finance Commission left the SCS issue to the centre’s discretion, Mr Reddy wanted PM Modi to take necessary decision in this regard.

Of the Rs 22,948.76 crore revenue deficit grant the centre owed the state post-bifurcation, Rs 18969.26 crore was still to be released, he pointed out, and requested that it be expedited due to the states precarious financial position.

Referring to Polavaram, Mr Reddy requested the centre to immediately accord administrative approval to the enhanced project cost of Rs 55,549 crore, which the Water Resources Technical Advisory Committee had already cleared.

Of this, Rs 33,010 crore would have to be spent on rehabilitation and resettlement of project oustees.

Also, the centre has to reimburse Rs 3,320 crore that the state already spent on Polavaram project works.

“We are determined to complete Polavaram by 2021, so please arrange for quick disbursal of required funds for the project,” the Chief Minister pleaded.

Mr Reddy requested that the money be released immediately. Noting that only Rs 10,610 crore was released to the state in the form of various Central grants in the current fiscal, he sought release of all pending grants.

Among other things, the Chief Minister requested release of funds for construction of a new port at Ramayapatnam, steel plant in Kadapa district and inter-linking of Godavari and Krishna rivers in the state.

He also wanted release of Rs 1,000 crore due from the centre towards building the states new capital city.

Be the first to comment on "3 Andhra Capitals, Polvaram Project"