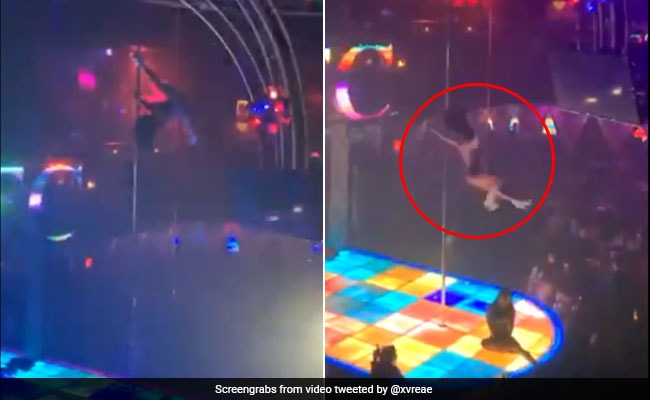 Genea Sky fell down a 15-foot pole while performing a trick.

A Texas stripper’s fall from a 15-foot pole left her with a broken jaw, chipped teeth, sprained ankle and needing stitches. Genea Sky was in the middle of a pole dance trick at XTC Cabaret in Dallas when she fell, reports The Daily Dot.

Horrifying footage of the incident has gone viral on Twitter, where it was shared on Sunday by user @xvreae. It has collected a whopping 10 million views on the microblogging platform.

The footage shows Genea falling from the nearly two-story-high pole and crashing landing on the club’s stage. Incredible enough, she continued dancing even after her fall. In an Instagram video shared a day later, she said she was able to get up and walk away on her own.

this sums up my first str*p club experience, i really do hope she’s ok 😭😭😭😭😭😭😭😭😭 pic.twitter.com/fA4Tu1mePL

“I’m getting a lot of messages asking me if I’m OK,” Genea said in a tearful video she posted on her Instagram. “I’m OK and I just wanted to let everybody know that I’m good.”

She added that she was having a hard time but still grateful. “I have my life and even with my injury to my face it could have been a lot worse,” Genea said.

While many on Twitter applauded the dancer for continuing her routine after the fall, the viral video also ignited a conversation around labour rights on social media. “Hopefully she gets workers comp,” wrote one person on Twitter. “No insurance to cover her job hazard, no 401k, no workmen’s comp,” said another.

Workers’ compensation is a form of insurance that provides medical and wage benefits to people who are injured at work.

The strip club that Genea Sky works at has refused to take responsibility for the fall or provide workers’ compensation as she is not a full-time employee.

Eric Langan, CEO of RCI Hospitality Holdings Inc, which owns the club, told TMZ that they take no responsibility for the incident as they did not “tell her to make the climb.”

Genea’s friend started a GoFundMe page to help pay for her medical expenses. It has raised more than $34,000 so far.

Be the first to comment on "Stripper Falls From 15-Foot Pole, Continues Dancing In Viral Video"