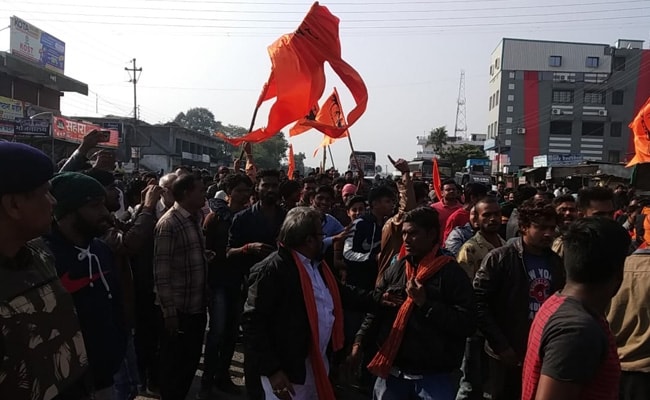 Many people came out in protest after the incident at Sausar in Chhindwara district.

Protests broke out over the removal of a bust of Maratha king Chhatrapati Shivaji by local officials with an excavator in Chhindwara district’s Sausar town on Wednesday. Agitators blocked a section of the Chhindwara-Nagpur highway after the incident.

Additional District Magistrate Rajesh Shahi said that the bust was put up by local organisations at the town’s Mohgaon intersection without requisite permission. An investigation has been launched into the matter.

The opposition BJP demanded an apology from Chief Minister Kamal Nath as well as the Shiv Sena’s response on the incident. “Chhatrapati Shivaji Maharaj is the pride of the nation, the source of inspiration for the country. His humiliation will not be tolerated at any cost,” tweeted former Chief Minister Shivraj Singh Chouhan, attaching a video of the statue being removed with the excavator.

However, state Congress spokesman Pankaj Chaturvedi accused the BJP of “needlessly politicising” the incident. “Shivaji Maharaj is also revered by the Congress. The JCB machine was used in Sausar because the platform on which the bust was placed was very strong. The bust was put up haphazardly,” news agency PTI quoted him as saying.

Mr Chaturvedi said that the bust would be put up “respectfully” in an “organised manner”, so that its position doesn’t hinder vehicular traffic.

Additional Superintendent of Police Shashank Garg said that the situation in the town has been brought under control.