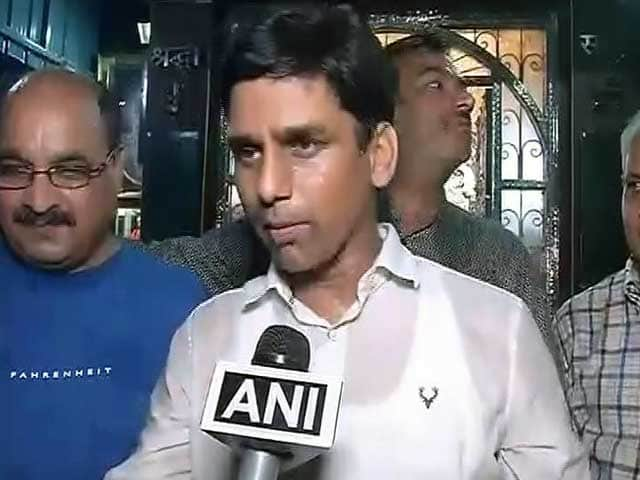 Naresh Yadav was returning from a temple when the incident took place, AAP said (File)

An Aam Aadmi Party worker has died after bullets were shot at the convoy of the party’s MLA from Mehrauli, Naresh Yadav, while he was returning from a temple following his win in the Delhi election on Tuesday, AAP has tweeted.

“Shots fired at AAP MLA Naresh Yadav and the volunteers accompanying him while they were on their way back from temple. At least one volunteer has passed away due to bullet wounds. Another is injured,” the party tweeted from its official handle.

“Volunteer Ashok Mann has passed away in the attack at AAP MLA Naresh Yadav. Today we have lost one of our family member. May his soul rest in peace,” it added.

Shots fired at AAP MLA@MLA_NareshYadav
and the volunteers accompanying him while they were on way back from temple.

At least one volunteer has passed away due to bullet wounds. Another is injured.

AAP MP Sanjay Singh has raised questions on law and order of the national capital.

“The brazen murder of Ashok Mann after an attack on Mehrauli MLA Naresh Yadav- this is the rule of law in Delhi, Naresh Yadav was returning from a temple,” AAP leader Sanjay Singh tweeted in Hindi.

Arvind Kejriwal’s Aam Aadmi Party surged to power in Delhi for a third term, boosted by a massive mandate of 62 seats – just a shade lower than its record 67 seats of 2015. The BJP won 8 seats.The Congress failed to open its account, second time in a row.

The law and order situation of the national capital, which is overseen by the centre, has been a hot topic ever since two shootings took place at the anti-Citizenship Amendment Act protest sites last month. The AAP had attacked Home Minister Amit Shah over the incidents.

Last week, after a mob barged into the campus of Delhi’s Gargi college and sexually assaulted students, Delhi Chief Minister Arvind Kejriwal had said such behaviour will not be “tolerated”.

“Misbehaviour with our daughters in Gargi College is very sad and disappointing. This sort of behaviour will not be tolerated. Culprits should be given the harshest possible punishment and we must ensure that children studying in our colleges feel safe,” Mr Kejriwal had tweeted.

Be the first to comment on "Shots fired at MLA Naresh Yadav after his win in Delhi, 1 volunteer dead, tweets AAP"