After plenty of leaks and rumours, Samsung has officially unveiled its S series flagships for 2020 — the Galaxy S20, Galaxy S20+ and Galaxy S20 Ultra. All three phones boast of new 120Hz refresh rate displays, 5G, improved cameras with 8K video recording support, big batteries, and an updated design with slimmer bezels. The Galaxy S20 and S20+ are direct successors to the Galaxy S10 and Galaxy S10+, but the Galaxy S20 Ultra is a new addition featuring a 108-megapixel rear camera, a 40-megapixel selfie camera and support for 45W fast charging. Samsung has also added Spotify integration with Bixby Routines, Google Duo integration with the dialler app and has tied up with Microsoft, to launch Forza Street for the first time on a smartphone.

The Samsung Galaxy S20 series will be available starting March 6 in various colours, the company says. This being the global announcement, we don’t have any details about India pricing or availability just yet.

Samsung also launched the Galaxy Buds+ truly wireless earphones, which now feature two-way speakers, three microphones for improved sound and voice clarity, and up to 11 hours of battery life on one charge, with the case adding another 11 hours. The earphones will have their own app called ‘Galaxy Buds+’, which allows them to finally work with iOS devices.

The Samsung Galaxy S20 is the smallest of the lot, measuring 151.7×69.1×7.9mm in dimensions and weighing 163 grams. It features a 6.2-inch Infinity-O Dynamic AMOLED 2X display, with a QHD+ (1,440×3,200 pixels) resolution and a pixel count of 563ppi. It’s HDR10+ certified and supports a high refresh rate of 120Hz. The phone is powered by a 7nm octa-core processor and depending on your region and the model you pick, you’ll either get one with a Samsung Exynos chip or a Qualcomm Snapdragon chip.

The Galaxy S20 comes with either 8GB or 12GB (5G variant only) of LPDDR5 RAM and 128GB of storage, for the LTE version. The latter is expandable via microSD card (up to 1TB). You also get an Ultrasonic in-display fingerprint sensor and face recognition for biometric authentication. The Galaxy S20 is IP68 certified for dust and water resistance. It supports 25W fast charging (charger included in the box), Fast Wireless Charging 2.0, and reverse wireless charging too for the 4,000mAh battery.

The cameras get a big upgrade. The Galaxy S20 features triple rear cameras, which includes 12-megapixel wide-angle sensor with an f/1.8 aperture, Super Speed Dual Pixel AF, and OIS; a 12-megapixel ultra-wide angle lens with an f/2.2 aperture; and a 64-megapixel telephoto camera with an f/2.0 aperture, PDAF and OIS. Some of the new camera features include a 3x hybrid optical zoom, Super Resolution Zoom up to 30x, and a new shooting mode called ‘Single Take,’ which captures a short video, along with a photo from all the sensors, for various perspectives. The selfie camera consists of a 10-megapixel sensor with an f/2.2 aperture.

Other specifications include One UI 2.1 based on Android 10, dual-band Wi-Fi 6, Bluetooth 5, NFC, stereo speakers with Dolby Atmos sound. It will also be available in single or dual SIM (hybrid) models, depending on the region.

The Galaxy S20+ is very similar to the Galaxy S20, but it differs in size, battery capacity, and you also get an extra rear camera. The Galaxy S20+ measures 161.9×73.7×7.8mm in dimensions and is heavier at 186 grams (188 grams for the 5G variant). It also has a slightly larger, 4,500mAh battery. The LTE version gets 8GB of RAM and 128GB of storage while the 5G variant gets 12GB of RAM and choice of 128GB, 256GB, and 512GB of storage. The front and rear camera configurations remain the same too, except for the addition of a rear depth camera. 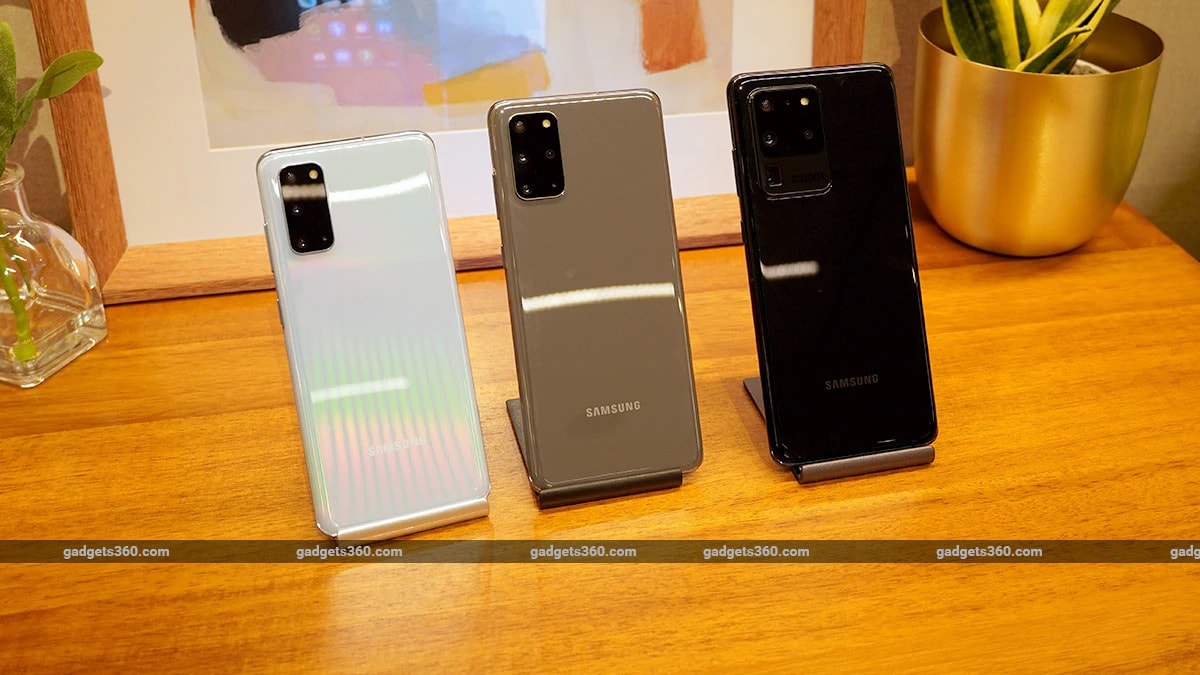 Finally, we come to the biggest phone in the series, the Galaxy S20 Ultra. It features a 6.9-inch QHD+ Dynamic AMOLED 2X display with a pixel count of 511ppi. The Galaxy S20 Ultra comes with either 12GB or 16GB of LPDDR5 RAM, while storage ranges from 128GB, 256GB and 512GB for both the LTE and 5G variants. The battery capacity has also been bumped up to 5,000mAh. The Galaxy S20 Ultra also supports 45W fast charging, through the optional adapter.

The Galaxy S20 Ultra measures 166.9x76x8.8mm in dimensions and weighs 220 grams (222 grams for the 5G variant). Some of the camera sensors also upgraded over the other two models. Apart from the wide-angle and depth cameras, the primary camera is a 108-megapixel sensor with an f/1.8 aperture, OIS, PDAF and you get a 48-megapixel telephoto camera with a f/3.5 aperture, PDAF, OIS. The Galaxy S20 Ultra also features a new periscope-style telephoto lens, which allows it to achieve 10x hybrid optical zoom and maximum ‘Super Resolution Zoom’ of up to 100x. The front camera is also a 40-megapixel sensor with an f/2.2 aperture.

Disclosure: Samsung sponsored the correspondent’s flights and hotel for the trip to San Francisco.