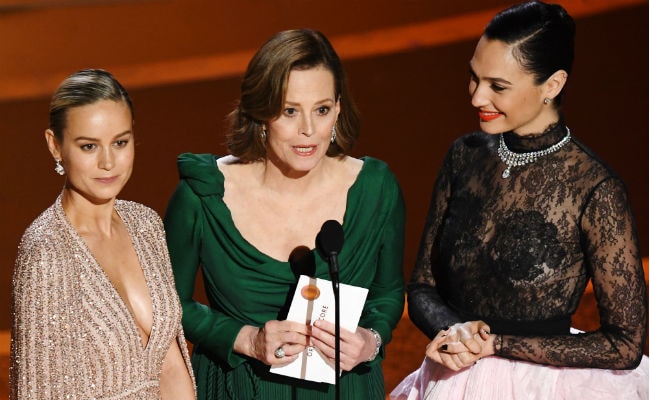 The Oscars ended with a bang Sunday, as South Korean movie Parasite became the first non-English-language film to scoop top honors on Hollywood’s biggest night. The wide-ranging, three-and-a-half hour show had plenty of memorable moments in the build-up to the awarding of the top prize. Here are some key takeaways:

Parasite director Bong Joon-ho had sensibly prepared a few winning comments – but by his fourth trip to the stage, he was scrambling for words. Having thanked his wife and cast upon winning for best original screenplay, Bong collected the prize for best international feature film with a sentiment from the heart: “I’m ready to drink tonight. Until next morning. Thank you.”

But he was back on stage moments later having been named best director, telling the jubilant room of A-list fans: “I thought I was done for the day and was ready to relax. Thank you so much. If the Academy allows, I would like to get a Texas chainsaw, split the Oscar trophy into five and share it with all of you,” he told his fellow nominees. By the time he rose to collect the award for best picture, a speechless Bong left the talking to his producers. “It’s (an) unbelievable night, it’s very hard to believe,” he said backstage.

In a year that saw female directors snubbed, the big question was – who would speak out about gender equality?The answer turned out to be: almost everyone.

Past Oscar winner Natalie Portman donned a Dior cape with names of women left out stitched into it, saying it was her “subtle way” of responding to the omissions. 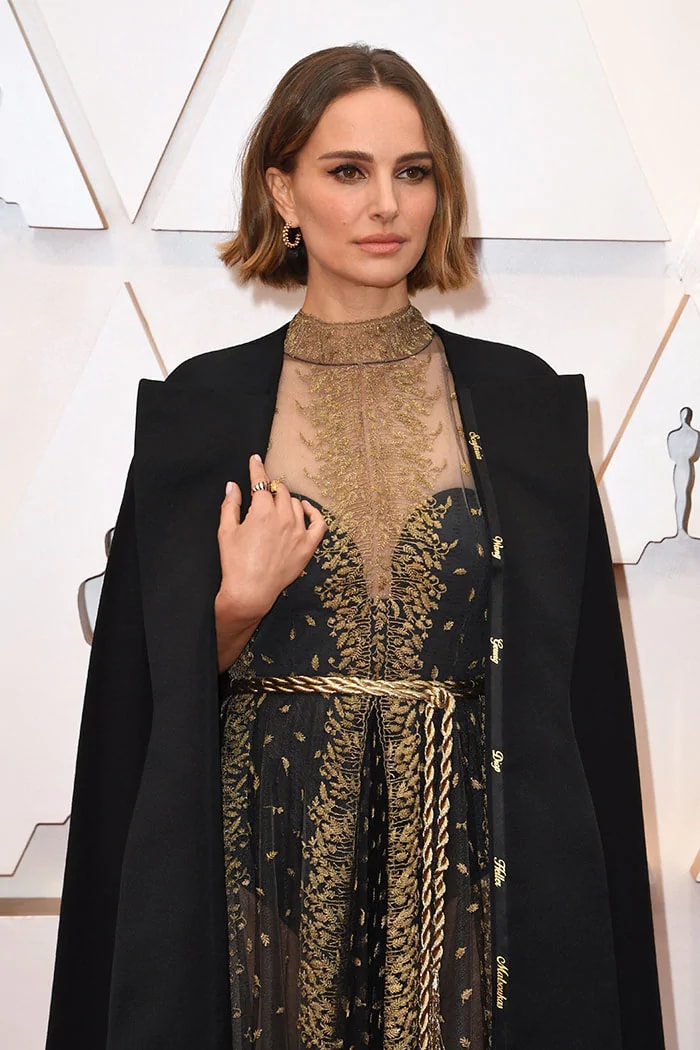 In her opening musical number, Janelle Monae praised “all the women who directed phenomenal films.” Janelle Monae at the Oscars.

Alien star Sigourney Weaver quipped on stage that she and female superheroes Brie Larson ( Captain Marvel) and Gal Gadot ( Wonder Women) were starting a “fight club.” “Men are all invited, but no shirts allowed,” Gal Gadot joked. “And the loser gets to answer questions from journalists about how it feels to be a woman in Hollywood,” she added. 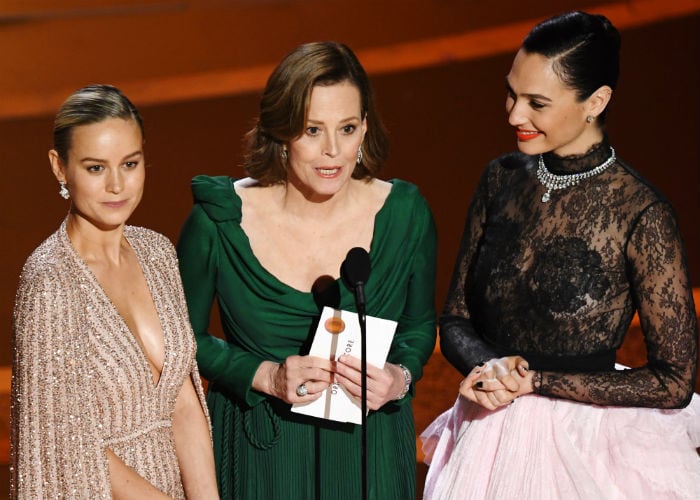 Brad Pitt has won multiple awards for Once Upon A Time… In Hollywood, and earned a reputation for delivering the season’s wittiest, most entertaining speeches. Following his Oscars win, the Hollywood heartthrob struck a more serious, political note, slamming President Donald Trump’s recent impeachment trial.

Backstage, Brad Pitt expanded on the theme, telling journalists: “When gamesmanship trumps doing the right thing, it’s a sad day and I don’t think we should let it slide.”

Asked about his earlier wisecracks at other galas, including jokes about his Tinder profile, Brad Pitt added: “I have some really funny friends that help me with some laughs.”

Expected tributes to basketball star Kobe Bryant, who was killed in a helicopter crash two weeks ago, were surprisingly understated.

The Lakers icon was the first entry in the traditional “in memoriam” video of those Hollywood has lost this year. But he drew an homage from veteran director Spike Lee, who arrived in a purple jacket with lapels bearing Bryant’s jersey number -24. 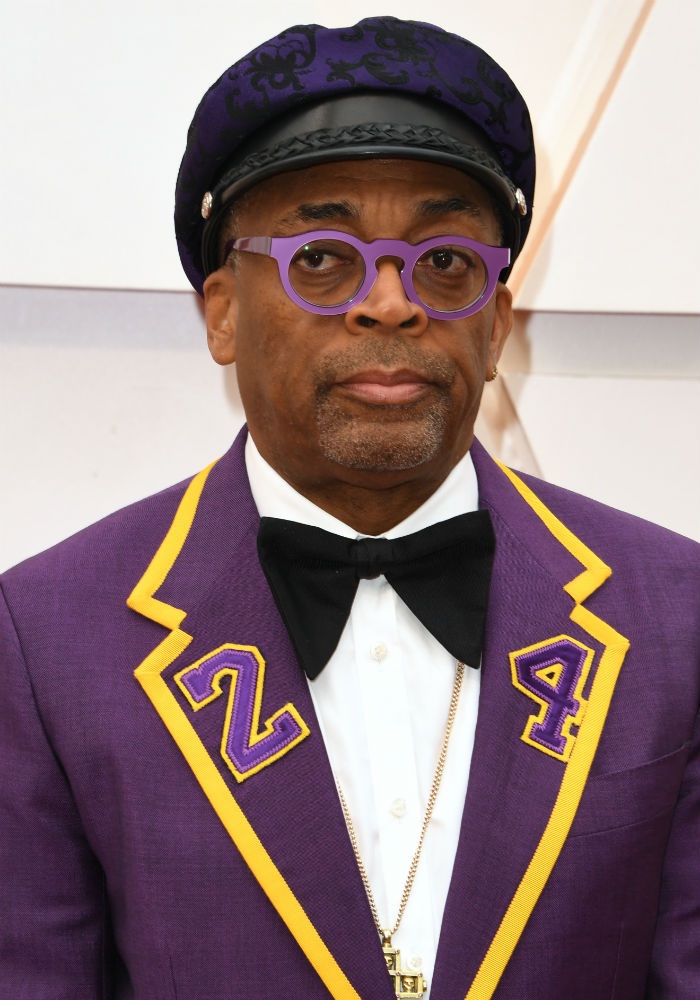 Spike Lee gave tribute to Kobe Bryants through his outfit.

Matthew A Cherry, collecting his award for best animated short film, dedicated his win to Kobe Bryant, saying: “May we all have a second act as great as his was.”

Another moment of Oscars history was made when Zack Gottsagen, of the indie hit The Peanut Butter Falcon, appeared on stage alongside co-star Shia LaBeouf to hand out the best live-action short award. Gottsagen became the first Oscars presenter with Down syndrome, slightly hesitating over his lines before being gently encouraged by LaBeouf. 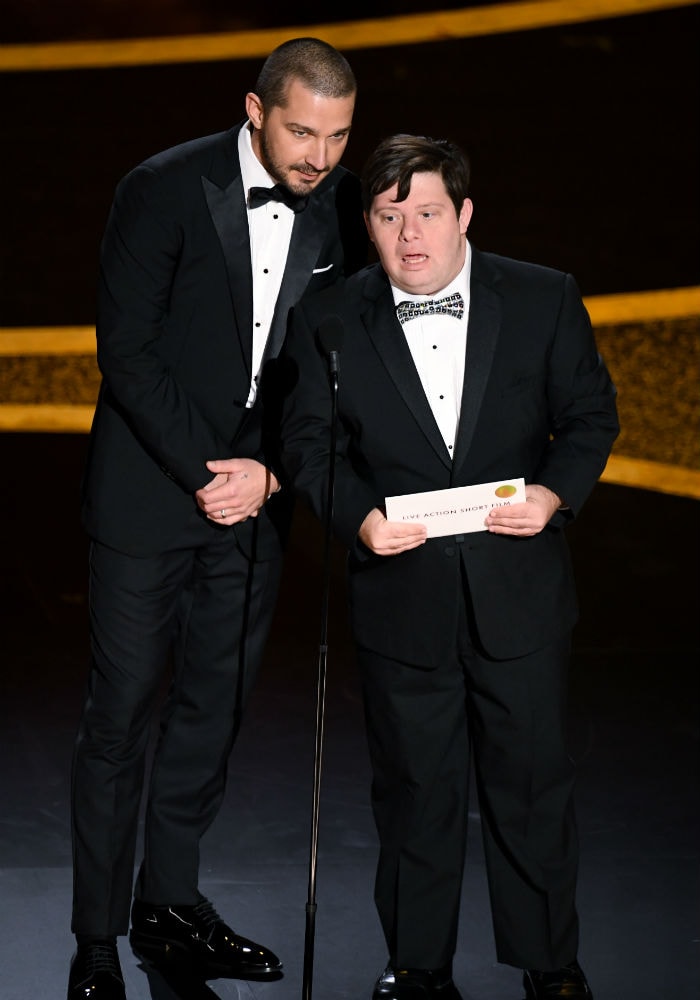 Zack Gottsagen at the Oscars.

“Shia was offered to present an Oscar. He said he would do it if he can share that moment with his beloved co-star Zach Gottsagen who we all adore,” tweeted Alma Har’el, who directed LaBeouf in Honey Boy.

‘Cats’ stars get the joke

One day after Cats scooped the most nominations for the Razzies – Hollywood’s annual celebration of its most terrible movies — the flop’s own stars took to the stage dressed in feline suits. 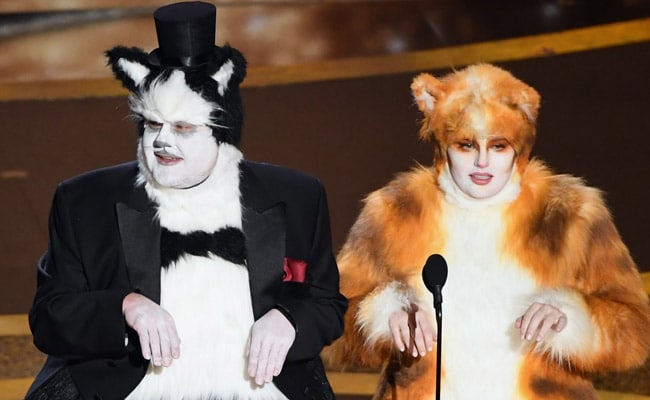 James Corden and Rebel Wilson at the Oscars.

The film – an adaptation of Andrew Lloyd Webber’s musical – used computer-generated effects to morph its all-star cast into deeply unnerving half-human, half-cat hybrids.”As cast members of the motion picture ‘Cats,'” began Rebel Wilson. “Nobody more than us understands the importance of…” added James Corden. “Good visual effects,” they concluded in union, before batting playfully at the microphone stand.

Be the first to comment on "Top Oscar Moments, From Women’s ‘Fight Club’ To Cats Jokes"