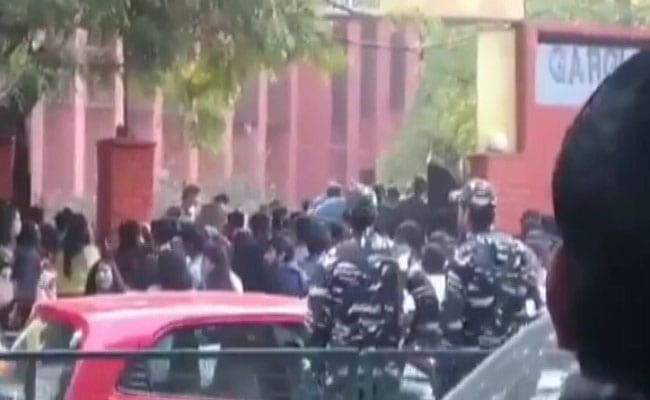 Students from Delhi’s Gargi College said they were molested on campus during Reverie festival.

Students from Delhi’s all-girls Gargi College have alleged that they were sexually assaulted on campus during their annual cultural fest this week by men who forced their way in while security guards and the police posted in the area did nothing.

According to eye-witness accounts and posts by students and teachers on social media, during the college festival ‘Reverie’ around 6:30 pm on Thursday, packs of unruly, drunk men mobbed the entrances of the college in South Delhi and forced their way in.

“They were not college students. They were at least 30-35-year-old men. Half of them were drunk. We have visuals of these men smoking inside our campus,” a student told NDTV over the phone on the condition of anonymity.

The men assaulted women, chasing them all over the campus, she said. “I could see women, first-year students lying unconscious, unattended on the field. It was medical emergency as well,” she added.

“The administration did nothing to control it. The RAF (Rapid Action Force) personnel were standing right across the campus. They did absolutely nothing. We have visuals,” the student said.

Allegedly turned away by the college administration, the students took to social media to post their accounts and have planned a protest inside the college on Monday.

Speaking to news agency IANS, college principal Promila Kumar claimed she was unaware of the incident.

“It is a serious incident and I will deliberate on it. It is a matter of serious concern, but unfortunately nobody has reported it to me,” she said.

“We had a huge security arrangement, including police, bouncers and even commandos along with the teaching and non-teaching staff, on duty. No one came to us and reported any such incident. We were taking rounds in the crowd. However, there is no doubt that it was very crowded. We were very vigilant but we couldn’t see anything of this sort,” Ms Kumar added.

The police told news agency PTI that they have not received any complaints from either the students or the college authorities.