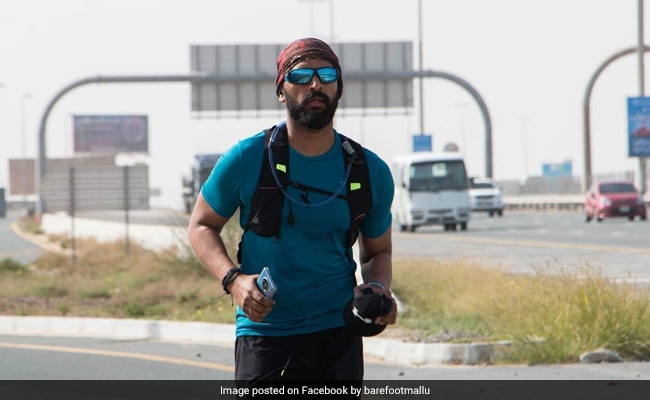 Aakash Nambiar began his long-distance run on January 25 from the Abu Dhabi Corniche.

An Indian ultra-marathon runner, known as the ‘Barefoot Mallu’ ran solo from Abu Dhabi to Dubai, covering a total distance of 118 km in 27 hours to inspire the youth of the United Arab Emirates (UAE) to make fitness a priority, it was reported.

Bengaluru-based Aakash Nambiar, 30, a native of Kerala, began his long-distance run along the E11 highway on January 25 from the Abu Dhabi Corniche and reached Ibn Battuta Mall in Dubai hours later on January 26, coinciding with India’s 71st Republic Day, the Gulf News reported on Friday.

Speaking to Gulf News, Mr Nambiar said: “I took the challenge because I wanted to create health awareness with a strong message for the youth of UAE to take fitness as a priority.

“Healthcare is of superior quality in the UAE but there is still a prevalence of (non-communicable) disease such as diabetes, cancer and heart problems. These are more of lifestyle diseases.

“There is also a high case of obesity and smoking. People even under the age of 35 are not physically active. So, inspired by my friend, Khaled Al Suwaidi, who ran from Abu Dhabi to Mecca, I attempted my own run to convey a message to everyone to take care of their health.”

The Abu Dhabi-Dubai run, however, was not the first ultramarathon for Nambiar.

He covered 120-km from Colombo to Punavathuna in Sri Lanka, before coming to the UAE.

Mr Nambiar is planning another long-distance run in the next five months.