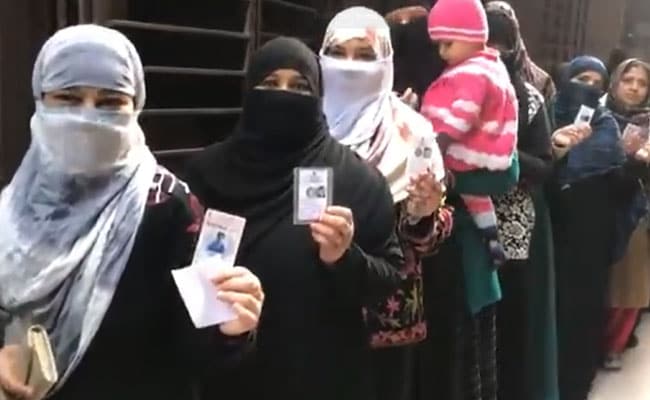 The video tweet showed a long queue of Muslim voters holding up their Voter ID cards.

Even as thousands came out to vote in the Delhi elections, the Karnataka unit of the BJP today tweeted out a video clip of a long queue of Muslim women voters along with a suggestion that they keep their identification cards “safe” for the impending National Population Register exercise.

“Kaagaz Nahi Dikhayenge Hum!!” the tweet said tauntingly. “Keep the documents safe, you will need to show them again during NPR exercise.”

The Hindi portion of the tweet is a reference to a popular slogan of defiance raised by those opposed to the Citizenship Amendment Act and the National Population Register, which many believe will lead up to the implementation of a nationwide National Register of Citizens.

Critics believe that the Citizenship Amendment Act, when implemented in tandem with the National Register of Citizens, may put millions of genuine Muslim residents at risk of persecution. Although the centre now claims that there is no immediate plan to implement the national register on a countrywide scale, critics have cited speeches made by Union Home Minister Amit Shah before the Lok Sabha elections to claim that such an exercise may actually be in the offing.

Keep the documents safe, you will need to show them again during #NPR exercise.#DelhiPolls2020pic.twitter.com/bEojjeKlwI

Several states, including West Bengal and Kerala, have already stalled the National Population Register process in their territories in protest against the new methodology adopted by the central government. The ruling party, however, insists that the additional responses and documents in question have to be provided only on a voluntary basis.

“No document is to be collected during the updation of NPR,” Union Minister of State for Home Nityanand Rai had said recently.

Prime Minister Narendra Modi said that the National Population Register, which is otherwise a “normal administrative process”, is being demonised for vote bank politics. “Those who carried out the NPR are now spreading misinformation. Biometric data was collected in 2010, we came in 2014…We have all the records. Why are you lying? Why are you fooling people,” he remarked in the Rajya Sabha recently.

Critics, however, are far from convinced. The slogan “Kagaz Nahi Dikhayenge“, which translates to “we will not show our documents”, comes from a poem written by comedian-lyricist Varun Grover that has found wide circulation on the Internet ever since protests against the Citizenship Amendment Act and the National Register of Citizens first broke out. The poem, which condemns police action against protesters across the country, has been translated into Bengali to “Kagaz Dekhabo Na” too.

The NPR exercise will be carried out across the country along with the house listing phase of the Census 2021 from April 1 to September 30, 2020.

Be the first to comment on "BJP Tweets Delhi Polls Video with Advice On NPR: Keep Documents Safe"