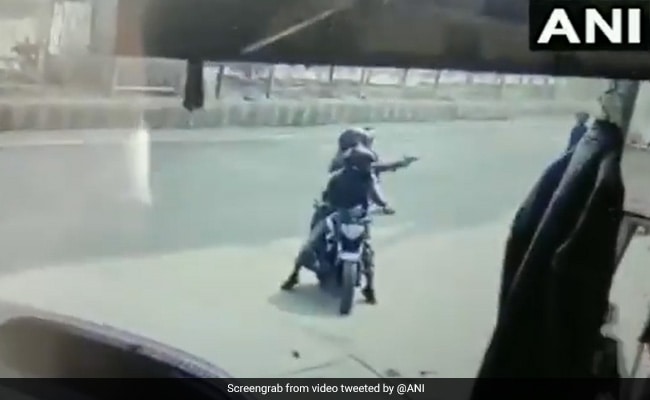 The motorcyclists were wearing helmets, which made identification difficult.

Two men on a scooter allegedly fired in the air near the venue of a protest against the Citizenship Amendment Act in Northeast Delhi’s Jafrabad on Friday, raising concerns of violence in the area. However, news agency ANI quoted police as saying that the shooting was the fallout of a dispute arising out of “personal enmity” rather than any attempt to intimidate protesters.

CCTV footage of the incident showed two people, both wearing helmets, shooting into the distance as passersby scurry for cover. Their faces cannot be seen.

While the ongoing protest against the Citizenship Amendment Act at Shaheen Bagh has already witnessed two instances of armed men turning up to threaten agitators, a student of the Jamia Millia Islamia University was injured in an attack by a gun-toting teenager on January 30.

Police said that the men drove up on a two-wheeler and fired in the air. “A case has been registered and an investigation initiated,” Deputy Commissioner of Police (Northeast) Ved Prakash Surya told ANI. Police are trying to locate more CCTV cameras in the area that may have recorded footage of the incident to establish the identity of the shooters, he added.

“The firing was not linked to the protests. We believe it is a case of personal enmity,” a senior police officer said.

However, people in the area termed the incident as yet another attempt to quell protests raging against the Citizenship Amendment Act since December. “The armed men fired in the air before fleeing the spot. They were riding a motorcycle without a number plate,” the news agency quoted one of the protesters at Jafrabad as saying.

Although the protest was disrupted for a time, it resumed soon afterwards.

The Citizenship Amendment Act makes it easier for non-Muslim migrants from Afghanistan, Bangladesh and Pakistan who entered India on or before December 31, 2014, to gain citizenship. However, critics claim that it discriminates on the basis of religion and lays the ground for persecution of resident minorities when a nationwide National Register of Citizens is set into motion.

(With inputs from ANI)