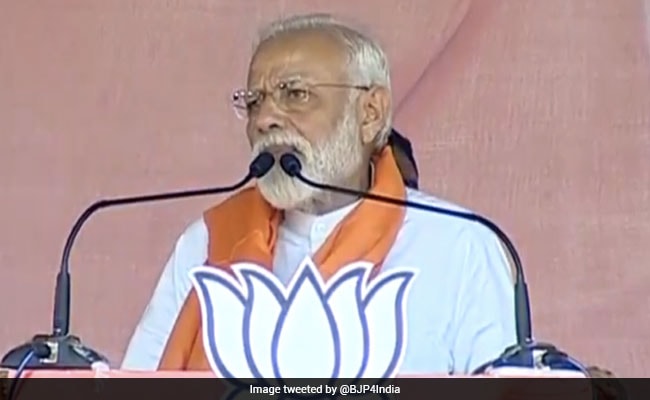 PM Modi will address a mega rally in the Bodo-dominated Kokrajhar town in Assam.

Prime Minister Narendra Modi will visit Assam today to participate in an event to celebrate the signing of the Bodo peace deal, an accord between the government and the banned militant group National Democratic Front of Bodoland, last month. This will be PM Modi’s first visit to the state since the government’s big move on the Citizenship (Amendment) Act that triggered protests across the country, including in Assam. Three people were killed in the state in the violence.

Last month, PM Modi’s office had declined an invitation to attend the Khelo India games in the north-eastern state amid protests against the citizenship law.

He will address a mega rally in the Bodo-dominated Kokrajhar town today.

“Tomorrow, I look forward to being in Assam. I will be in Kokrajhar to address a public meeting. We will mark the successful signing of the Bodo Accord, which brings to an end a problem that had been persisting for decades. It marks the start of a new era of peace and progress,” PM Modi tweeted yesterday.

Tomorrow, I look forward to being in Assam. I will be in Kokrajhar to address a public meeting.

We will mark the successful signing of the Bodo Accord, which brings to an end a problem that had been persisting for decades. It marks the start of a new era of peace and progress.

PM Modi might has some big ticket announcements for Assam, in the Bodo-dominated region and though the Bodo tribes are celebrating, non-Bodo communities are anxious.

The Bodos see the peace pact with the government as a step closer to a separate state.

“We all are so happy since it is a great moment for the Bodo society. After the accord, we have finally been able to solve the extremist problem and end gun culture,” Awsarang Basumatary, a young activist from the All Bodo Students’ Union, which has been spearheading the statehood movement, told NDTV. The group is a signatory of the new accord.

In the Bodo-dominated region, comprising four districts of western Assam, the Bodo tribals which make up over 30 per cent of Assam’s population, rule over close to 70 per cent of non-Bodos.

In 2012, clashes between Bodos and Muslims resulted in 100 deaths. Fourlakh people were displaced.

For close to 40 years , the Bodo region has seen large-scale violence and ethnic unrest and over 4,000 people have been killed. The agreement with the government brings a hope for peace as all the rebel groups are on-board.

The non-Bodos feel that insurgency is perhaps over but fear the dominance of the Bodo community.

“The Bodoland Territorial Region (BTR) accord says new Bodo villages can be added and non-Bodos can opt out of BTR. But take the case of this non-Bodo village. Here, over 3,000 people were affected in the 2012 violence. We are surrounded by Bodo villages on all sides. So, in the new BTR, where will we go? In Bodoland or Assam?” Abdul Samad Ahmed of the All Bodoland Minority Students Union said.

Be the first to comment on "PM Narendra Modi In Assam Today, First Visit After Citizenship Amendment Act CAA Protests"