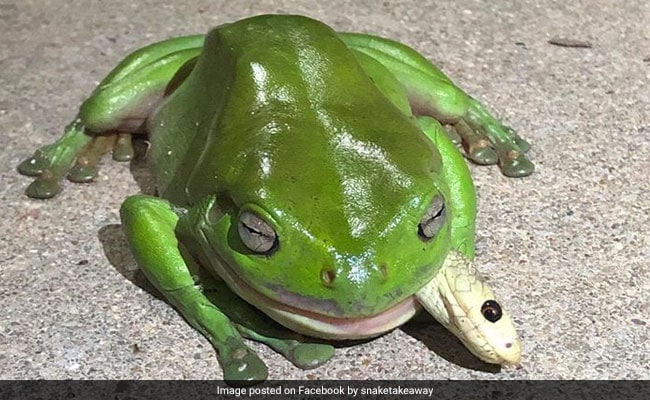 A green tree frog has miraculously survived after eating one of the world’s most venomous snakes in Australia. On Tuesday, Jamie Chapel, the owner of Snake Take Away and Chapel Pest Control in Queensland was called to remove a deadly Coastal Taipan from a woman’s backyard.

Coastal Taipan is the third-most venomous land snake in the world. “When the Coastal Taipan strikes it injects a large amount of highly toxic venom deep into the flesh,” explains the Australian Museum. The venom affects the nervous system and the blood’s ability to clot, which can lead to headache, nausea, paralysis, internal bleeding and kidney damage.

Mr Chapel told Daily Mail he was on his way to the home in Townsville when the woman called him back to say the snake was being eaten by a frog.

“By the time I got there the frog had been bitten quite a few times but had almost swallowed it completely,” he said. A Facebook post with photographs of the green tree frog devouring the snake has gone viral with a ton of shocked comments since it was shared two days ago.

Mr Chapel explained that he wanted to save the snake, but it was too late by the time he arrived at the caller’s home. “The frog was already it eating and wasn’t going to let it go,” he said to 7 News.

Though he could not save the snake from being swallowed, his job wasn’t over as he was afraid that the frog would regurgitate it alive.

“I wasn’t sure if the frog was going to survive, but I didn’t want it to regurgitate the snake alive and for it to slither back into the woman’s yard, so I took it back with me,” he said.

Mr Chapel took the frog back home with him, not expecting that it would survive after swallowing the venomous snake. Miraculously though, the frog is alive and thriving, and Mr Chapel said in the comments section of his Facebook post that it would soon be released.