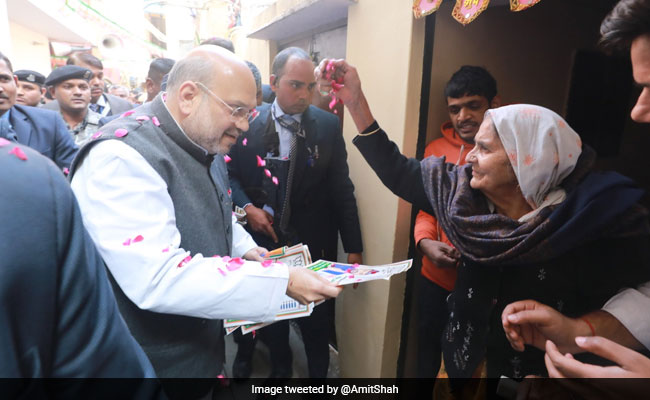 Amit Shah — tagged the Chanakya of modern day Indian politics and the all-powerful leader of the BJP — has been knocking on every door over the last 20 days, seeking the mandate of Delhi. That image, around 240 MPs and 70 union ministers which the party has pushed into the campaign for Saturday’s assembly polls, is seen to indicate the priority the BJP has given to the election.

Going door-to door as a home minister is a first for Mr Shah, the architect of the BJP’s massive victory in the 2014 national election. But months later, the party’s big campaign for Delhi fell flat, with Arvind Kejriwal’s Aam Aadmi Party capturing 67 of Delhi’s 70 assembly seats. The BJP ended up with just three seats in what came as a shock defeat. What followed was five years of continuous friction with the Arvind Kejriwal government.

Five years on, the party appears determined to win the rematch. Senior party leaders say they have a good chance in view of the results of last year’s parliamentary election – winning all seven seats in Delhi.

But with the results in 2014 being similar, the party has pulled all stops, holding an unprecedented 5,000 rallies over 20 days and drawing up a list of 40 star campaigners to take on Arvind Kejriwal. The schedule was drawn up with the idea of intensive focus on each assembly segment – three to four rallies every day for 20 days.

It has also tasked its senior leaders — ministers in the Narendra Modi government and 11 state chief ministers – to fuel its high-powered campaign. The leaders were instructed to focus on small groups in what the party called “nukkad (street corner) meetings” – typically gatherings of 200 or 300 people. The party planned 10,000 small meetings over the 20-day period.

The shift in strategy – from mega rallies to street corner meetings – came after the success of the party’s grassroots contact programme.

The BJP, however, played down the extra effort it is putting in.

Asked about the matter, the BJP’s Manoj Tiwari told NDTV today:  “We in the BJP do not take any election lightly, or for granted. From your angle, someone is a Prime Minister and someone is a home minister. But to us, everyone in the BJP is a karyakarta“.

Elections will be held in Delhi on Saturday, the votes will be counted next week, on February 11.

The MPs, who are expected to visit the slum clusters of the capital and spend nights there, were roped in as they were “in Delhi anyway for parliament”, Mr Tiwari said. “They will spend time with the JJ colony residents and eat meals with them,” he added.

Be the first to comment on "Amit Shah Doorsteps Delhi, 240 BJP MPs Do All-Nighters For Saturday Polls"