It was a garbage dump, the site having impossible dimensions of 15 ft. width on one end and zero on the other, and extending 120 ft. The owner had marked the space as unusable and unsaleable, with the residents of the locality using it as a convenient dump yard for household waste and construction debris. When architects Nischal Abhaykumar and Jesal Pathak of M9 Design Studio decided to buy the site to build a residence, many eyebrows were raised on the prudence of such a decision. 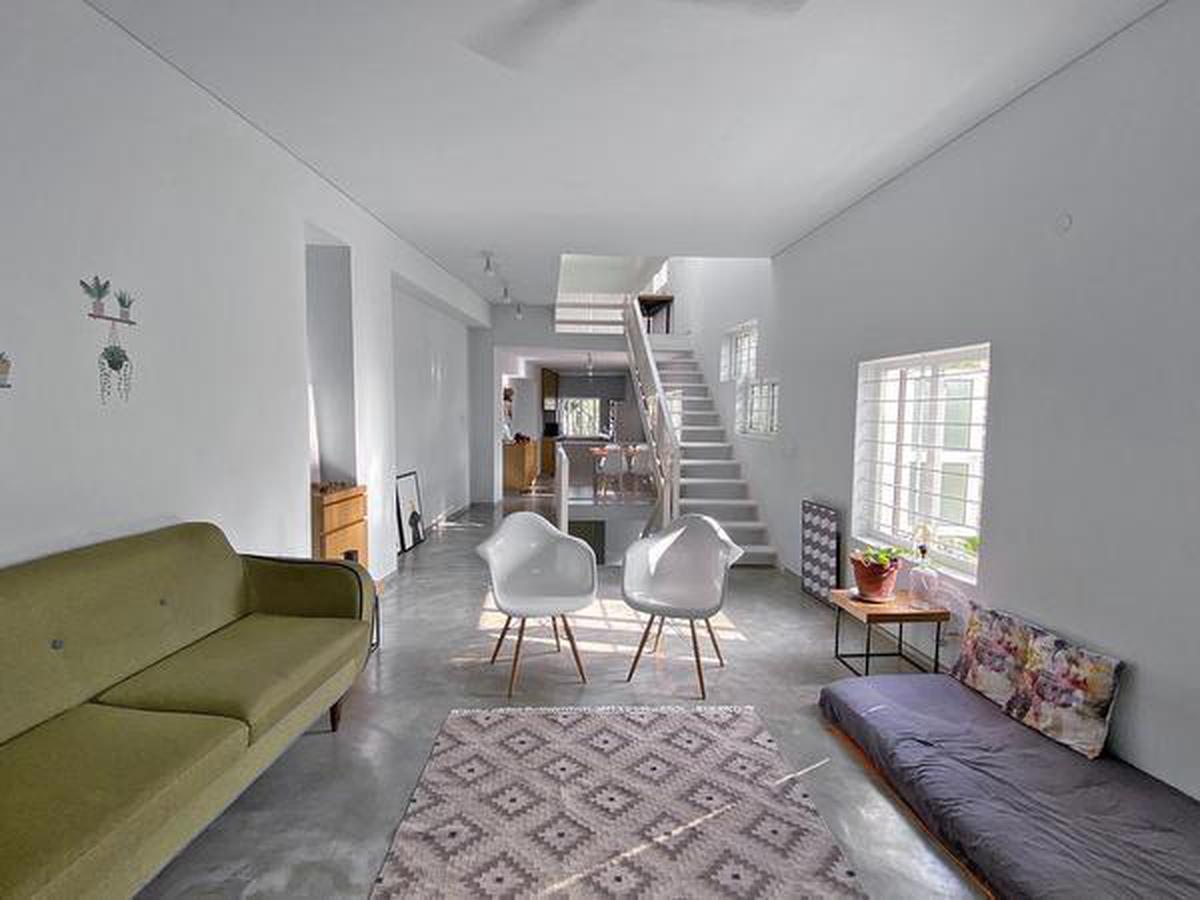 Yet, a residence they did build, of 1,500 sq. ft going up three levels and accommodating two bedrooms along with the living, dining, kitchen and study area. Built in a contemporary minimalist style, the structure is designed such that the exterior is playful and belies the steep vertical expanse. The ensuing façade features staggered windows that come in different sizes, thus removing the visual assimilation of three levels. “The staggering of the windows takes away the clarity on levels besides bringing in an interesting design element to the white exterior”, states Pathak.

Given the triangular, narrow dimensions of the site, the structure was confined to one segment of the site where the width broadened to 15 ft., while the second segment tapering to zero was taken up for the car park and green space. “The landscape extends 50 ft., starting from a width of 6 ft. to narrow down to zero at the end of the site”, adds Pathak. The conventional compound wall was dispensed with and replaced with trees and hedges to mark the boundary. The result: the white edifice rises elegantly on the street with a charming tree cover to segregate it from the public space. 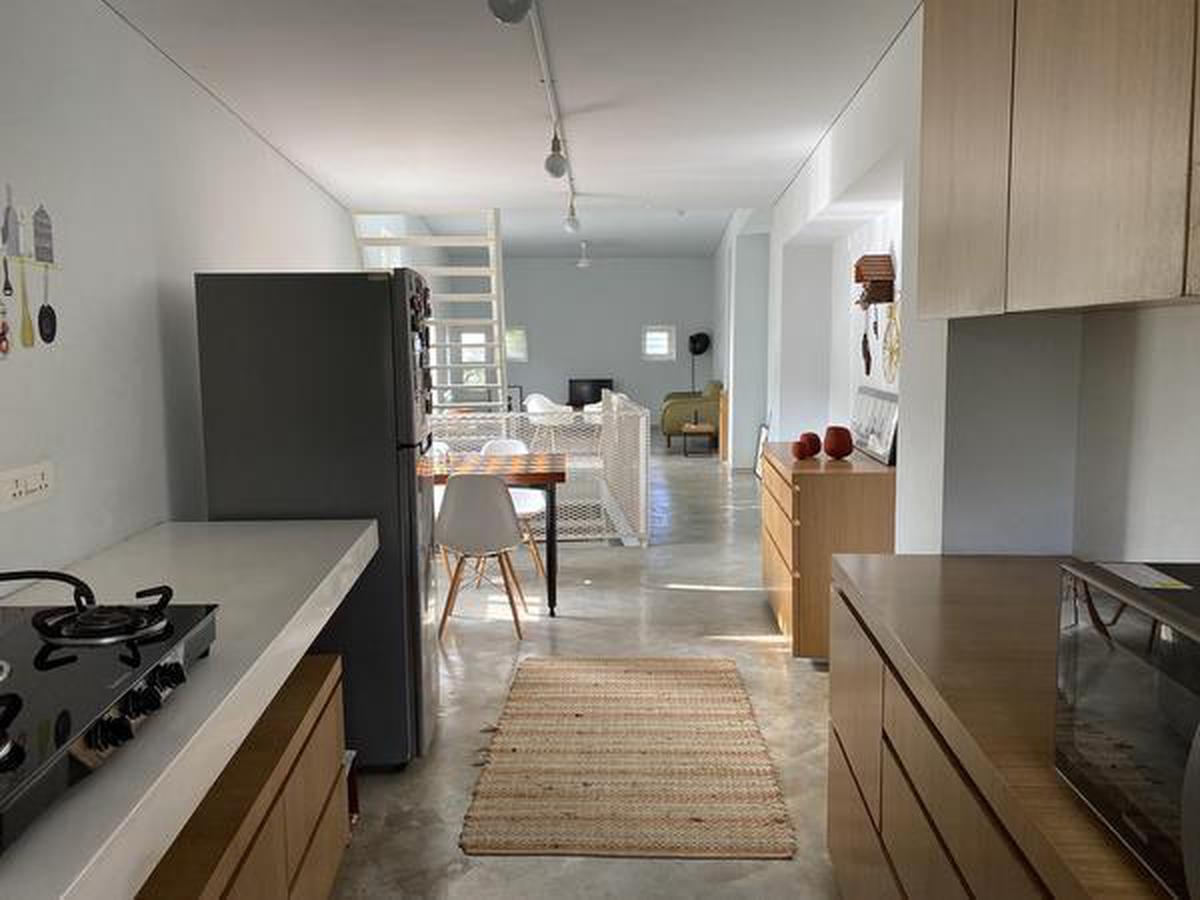 “The functional spaces within the building had to be spread over 3 levels because of the narrow site”, Pathak further explains. Since the building opens up to the street, the main door is structured as a setback with an outdoor foyer to denote the demarcation as well as lend dimension to the entrance.

Since the entrance area is the narrowest part of the building, given its tapering thenceforth, the staircase and a tucked away utility space open up into the indoor foyer. The wider segment of the building at ground level houses the first of the two bedrooms. The staircase displays transparency, with light metal treads and railing opted to give the feel of openness and expanse to the interiors. Natural light filters in through the skylight over the stairs. The second level accommodates the living and dining which are strategically placed once again on the wider section of the site. Minimalist portable furniture marks the living area, their lighter presence complementing the pristine white walls of the interiors. The kitchen requiring much less space, finds its placement on the narrower portion of the building.

The master bedroom occupies the entire third level, opening to a small study. “The cot and the wardrobe are placed as an island in both the bedrooms. While this successfully addresses the lengthy dimensions of the room, the wardrobe, because of its positioning, brings in an added functionality of demarcating a dressing area within the bedroom”, says Abhaykumar.

The interiors interestingly also display a complete absence of walls because of the peculiarity of the site, opening up all the functional spaces to flow freely. Not only is there a seamless horizontal connect at every level, there is also a vertical connect between all the levels through the sky-lit staircase which acts as the central spine of the building.

“The bedrooms have sliding, foldable doors which are slid into place whenever privacy is sought. The only rooms that have a conventional door are the two washrooms in the residence”, elaborates Abhaykumar. “These doors too rise full height to the ceiling, sans the usual lintels. Their expanse adds another dimension to the space.”

You have reached your limit for free articles this month.

Register to The Hindu for free and get unlimited access for 30 days.

Find mobile-friendly version of articles from the day’s newspaper in one easy-to-read list.

Enjoy reading as many articles as you wish without any limitations.

A select list of articles that match your interests and tastes.

Move smoothly between articles as our pages load instantly.

A one-stop-shop for seeing the latest updates, and managing your preferences.

We brief you on the latest and most important developments, three times a day.

Not convinced? Know why you should pay for news.

*Our Digital Subscription plans do not currently include the e-paper ,crossword, iPhone, iPad mobile applications and print. Our plans enhance your reading experience.

Be the first to comment on "Triangle as home – The Hindu"