When four Jaish-e-Mohammed terrorists struck at the Pathankot air base in the early hours of January 1, 2016, they exposed much more than the poor perimeter security of the complex, abysmal coordination among the services at the apex level. The air base was under the New Delhi-based Western Air Command while a nearby army division of four infantry brigades was under the Chandimandir-based Western Command. The army, which should have swiftly responded, was looking to Delhi for orders. The terrorists were eventually eliminated by the army before they could hit their targets, but the episode created bad blood between the service headquarters.

Exactly four years later, India’s first chief of defence staff (CDS), Gen. Bipin Rawat, told the media that his job would be “to achieve more through integration”. “The synergised efforts should not be the sum total of the three. It should be more,” he said.

Gen. Rawat will now be the man the political leadership dials whenever a matter requires coordination among the services-a Pathankot-like terror strike, for instance. As CDS, however, he is not just the government’s principal military advisor, but also the head of the new Department of Military Affairs (DMA) and the permanent chairman of the Chiefs of Staff Committee. The CDS will not only drive the integration of the armed forces, but push for the far trickier Phase 2 — integrating them into joint theatre commands. The government’s cabinet note mentions how the DMA will ‘facilitate restructuring of military commands for optimal utilisation of resources by bringing about jointness in operations, including the establishment of joint/ theatre commands’.

These are still admittedly early days. The CDS and DMA are independent India’s biggest military reform, but it is still largely work in progress. The DMA’s roles and responsibilities and staffing pattern are being figured out. “We have been asking for entry into the defence ministry and a CDS for decades. Having finally got what we wanted, we cannot afford to fail,” says a serving three-star general.

Up ahead is a three-stage process. “Our first priority is the DMA, the engine that will drive integration. Joint logistics and training would be next. Theatres will come only after those settle down,” says a senior defence official.

As CDS, Gen. Rawat has been given a three-year mandate to put these building blocks of jointmanship in place. Army chief Gen. M.M. Naravane says the timeframe is significant because the government means business. What will evolve, he says, are very India-specific integrated commands. “We will go into these joint or integrated theatre commands keeping our requirements and operational realities in mind, and will not blindly copy any existing system in any other army of the world,” he said at his Army Day media conference on January 11. The Indian system is likely to be unique because few other countries face such vast disputed boundaries — over 4,000 km, with nuclear weapons-armed China and Pakistan. “Unlike, say, the US and the UK, we have an inarguably unique position of two contiguous unresolved borders-both of them active,” says Lt Gen. Satish Dua, former chief of integrated staff, Headquarters-Integrated Defence Staff. “Not only do we need a model suited to our context and needs, we also have to ensure we are not operationally off-balance at any time.”

This Phase 2 of the military reform is likely to be the toughest as the three services have operated in silos since Independence, planning, training and equipping themselves to fight wars independently. This fragmented approach has led to enormous wastages, duplication of resources and, consequently, dissipation of combat potential.

The Indian system will be unique as few other nations face such vast disputed borders: 4,000 km, with nuclear-armed neighbours

Over a decade ago, all three services bought two types of drones from the same Israeli drone-maker at different prices and little interoperability — the IAF drone could not be controlled by a naval ground station. The problem continues. The most recent instance of this lack of inter-service coordination was the purchase of Apache attack helicopters from the US. The IAF bought 22 Apaches in 2015 while the army is negotiating to buy six of its own. Both are meant for destroying enemy tanks, but will have different pilots and command chains and even separate logistics branches. The IAF Apaches will operate under the Western Air Command while the army’s will be distributed amongst the three Strike Corps in three commands.

At the higher levels, this manifested in the form of 17 single service commands — the army and air force have seven each, the navy has three. Now, in a radical military surgery not seen since Independence, the government proposes to conjoin them into joint commands. Gen. Rawat has decided to begin with low-hanging fruit — joint commands for logistics and a single joint air defence command, pooling in the air defence resources of the army and the air force. 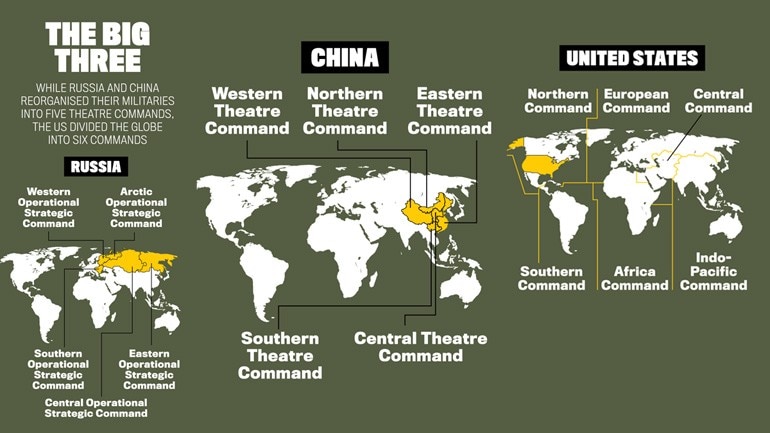 The first will be the air defence command, integrating air force and army gun and missile batteries. Gen. Rawat indicated a roadmap for it by June 30. This, defence officials say, makes sense. Even when co-located in potential conflict zones, such as Jammu & Kashmir, the lack of coordination is enormous. The Corps of Army Air Defence (AAD) responsible for army air defence units in J&K, for instance, reports to the Udhampur-based Northern Army Command. Air force missile units in the region report to the Western Air Command. There is little coordination between them.

The army’s AD regiment has langu­ished with no new acquisitions since the 1990s. This will change when it is subsumed into an IAF-led command with a common communications network.

Next will be the creation of logistics commands. An attempt made by the Headquarters-Integrated Defence Staff a few years ago was given up due to stiff opposition from the three services.

A general indicates the enormous wastage caused by stockpiling of inventory by various units, from the battalion to the command levels, and mentions how civilian expertise might be needed to streamline these. A logistics command would subsume the activities of multiple organisations, such as DG Operational Logistics, Quarter Master General, Engineer-in-Chief and the Department of Defence Production.

The three services follow different procedures (revenue procurement, warehousing, repair and disposal) which will need standardisation for a common inventory. They have separate communication networks too, a situation being resolved now by the Defence Communication Network.

“Future wars are likely to be intense and short. The quality of logistic support will play a major role,” says Lt Gen. Rakesh Sharma, former adjutant general of the army. The challenges, he says, are formidable. For starters, similar items have different names in the services. Codifying materials and inventory itself will be a nightmare as the Directorate of Standardisation works under joint secretary (supply) in the defence ministry.

Among the Shekatkar committee’s most crucial recommendations was that future wars between India, China and Pakistan would break out only in the mountains and remain confined there. This would necessitate the formation of three theatre commands-west, east and north, integrating air force and army assets to face what the armed forces call a collusive two-front war with China and Pakistan.

The navy will have the peninsular command, integrating all service assets south of the Vindhyas, while the Andaman & Nicobar Command will be a tri-services command.

A ‘theatre’ command, with elements of all three services, would mean reductions in cost and manpower and increase in combat power. The proposed Western Theatre Command, for instance, will be a single geographical unit, welding all air bases and army formations, from the plains of Punjab to the Rann of Kutch in Gujarat, under a single theatre commander, either from the army or the air force.

Theaterisation has been vociferously opposed by the IAF because it fears becoming the larger army’s air force. ‘Even after the establishment of theatre commands, the responsibility of the country’s air defence would remain with the air force, and so will offensive air operations and strategic and tactical air transport support for the entire gamut of operations. IAF assets, including special weapons, are limited in number and are distributed across the country, requiring base-installation support. It is not possible to triplicate or quadruplicate them to every theatre command,” wrote Air Chief Marshal S. Krishnaswamy in an August 2018 paper in the IAF think tank, Centre for Air Power Studies. Going forward, this is likely to be a minefield and reason why Gen. Rawat has left theaterisation for the last.

Military analysts say it is important for the CDS to draft a document explaining the rationale, role and expectations of joint commands. “As is well known, the experiment with the Andaman & Nicobar joint command was killed by the services, who did not want it to succeed. The CDS should, therefore, be very clear on his roadmap and vision for the joint command and go beyond making simplistic statements, like we will not ape ‘western’ models,” says Anit Mukherjee, assistant professor in the South Asia programme at the S. Rajaratnam School of International Studies, Singapore. As CDS, Gen. Rawat faces a long and challenging road ahead, over the next three years, as he puts India’s military on the path of reform.