Attack of the Drones – The Big Story News – News Description

It was late August and India’s security establishment suddenly sat up after an incident in Punjab. An anonymous caller tipped off the Amritsar (rural) police of a ‘fan-like gadget’ lying in a paddy field in Muhawa village of the district. With the recovery of a second drone a month later in Tarn Taran district, the Punjab police pieced together an audacious plan by the Pakistan-based Khalistan Zindabad Force to infiltrate weapons from across the international border. Four hexacopter drones-each around two-feet-wide and capable of carrying a 4 kg payload-had flown multiple sorties to fly in nearly 80 kg of arms and ammunition, including AK-rifles, pistols and fake currency. It was, as Punjab chief minister Capt. Amarinder Singh said in a tweet, ‘a new and serious dimension on Pakistan’s sinister designs in the aftermath of the abrogation of Article 370’.

The incident sparked off concern among the police, paramilitary and the army alike. All at once, it looked like the Union home ministry’s snazzy smart-fence project-in the works for a decade and costing thousands of crores-could prove potentially powerless for it has been designed only to stop intruders from physically crossing the international boundary. Aerial incursions were a different ballgame. The question everyone is asking in North and South Block, which house the ministries of home and defence, is: how exactly do you counter rogue drones? What would it take to stop an explosive-laden drone from flying into the path of a passenger aircraft when it is at its most vulnerable-landing or taking off. How to stop ‘kamikaze’ drones from crashing into crowds at a Kumbh Mela or flying directly into a VVIP enclosure at an important public event?

Multiple agencies, including the IAF, the Bureau of Civil Aviation and Security (BCAS), which operates under the ministry of civil aviation, and the Special Protection Group that handles VIP security, are scrambling to address the threat. The government is also running field trials of counter-unmanned aerial systems (C-UAS) like the one conducted by the BSF at its camp in Bhondsi, Haryana, last month.

Task forces appointed by the Bureau of Police Research and Development and ministry of civil aviation are identifying a list of sensitive installations that need C-UAS protection and drawing up a standard operating procedure for law enforcement agencies on what to do in the event of a rogue strike. India’s Republic Day parade in January 2018 was among the first public events where security forces were specifically equipped with radars and anti-aircraft guns to counter rogue drones.

The Tarn Taran episode was the culmination of a year of hand-wringing incidents where rogue drones have been in the news globally. Each incident illustrated the ability of even cheap off-the-shelf drones to transform the way terrorists carry out attacks-from the assassination attempt on Venezuelan president Nicolas Maduro last August, where two drones packed with explosives exploded at a military parade in Caracas just metres away from where he was speaking, to January this year, when Houthi rebels used commercially available quadcopters to attack a Yemeni military parade, killing six people. 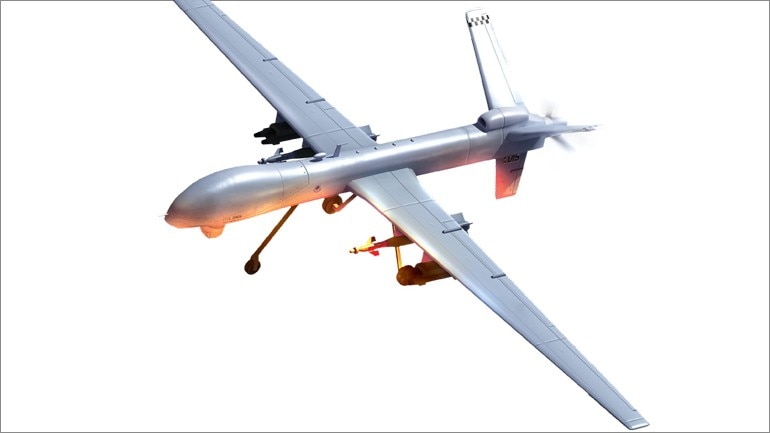 That drones represent one of the biggest shifts in aerial warfare was never in doubt. The US was the first to weaponise ordinary reconnaissance drones with missiles and use them as killing machines to hunt down Taliban and Al Qaeda in the Af-Pak region. On September 14, Houthi rebels, fighting a Saudi Arabia-led coalition in Yemen, used explosive-laden drones in a pre-dawn att­ack on two Saudi refineries. The devastation led to the world’s largest oil producer cutting oil output by half. Fixed-wing drones like the Predator, which fly longer and faster, mercifully, are still out of the reach of non-state actors. For now.

What Indian security agencies are worried about is the availability of cheap quadcopters and hexacopters-mini helicopter-like drones, which can land and take off vertically-like the ones used in Punjab. The GPS-fitted ‘Tarot 680 Pro’ drones are manufactured by a Chinese company. Its makers advertise its use as an aerial photography tool, but its capabi­lities make it an ideal dual-use vehicle: it can be used just as easily to deliver an explosive payload. A DJI M600 Matrice commercial drone, a more sophisticated version of the Tarot, costs around $5,000 (Rs 3.5 lakh) and can carry a 7 kilo payload for over 6 km. The technology is simple and gives attackers the ability to attack anonymously and from afar. “Exploitation of airspace with weapons was the privilege of the state and its militaries so far,” says Commodore Shiv Tewari, a former special forces officer. “Drones using low end commercially available technology have snatched that advantage.”

‘Countering Rogue Drones’, a report released by FICCI and Ernst & Young this August, points out the risks-‘Drones are controlled over wireless links with a typical span of control being over 2 km. This makes it possible for it to be controlled from anywhere within a 13 sq. km area-an area larger than an Indian city suburb. This makes tra­cing a drone operator a practically impossible task.’ “Drones are small, hard to detect and travel quite fast, covering 20 metres a second. The reaction window, from the time you detect them to the time you come up with a counter, is very limited, just 90 seconds or so,” says Tanmay Bunkar, CEO of Botlab Dynamics, an IIT Delhi-based startup. How to stop them

India’s civil aviation ministry announced the first drone policy last year, seeking to regulate an industry that Goldman Sachs estimates will reach $100 billion by 2020. The policy, which came into effect in December 2018, calls for all drones to be registered and issued a unique identification number, and for a permit to be obtained for all drones flown above 50 feet. Drones are prohibited near no-fly zones like airports and sensitive military areas. Flyers also have to obtain permission via a mobile app in a system called ‘No Permission, No Takeoff’ (NPNT). If permission is not given, a drone cannot take off. “But terrorists are unlikely to fly a registered drone and hence NPNT is of no use,” says an Indian drone scientist. The FICCI-E&Y report points to the risk posed by a latent population of close to 50,000 drones operating in India prior to the drone policy notification in August 2018.

That’s where C-UAS step in. Transparency Market Research estimates this industry will touch a healthy $1.2 billion by 2025. Multiple agencies within India, including those from the state and Centre, are working on ways to counter rogue drones, either developing the technology in collaboration with the private sector or importing them off-the-shelf. The Israeli ‘Iron Dome’ air defence system, which uses a network of missiles and radars to protect cities, is on the radar.

“Drones and anti-drone technology are on our prime agenda considering the current threat scenario,” a DRDO spokesperson says. The Goa police have developed and deployed a system to track and identify rogue drones, especially over crowded areas using radio-frequency scanner technology. A complete C-UAS, the FICCI-E&Y report says, must be capable of detecting, tracking as well as intercepting drones. Detecting and tracking a UAS is difficult because conventional radars are meant to detect fast-flying large metallic aircraft whereas drones usually have the radar cross-section of a large bird. Detecting a UAS requires specialised military-grade high-frequency radars. Interdiction and neutralisation of a UAS can only be done using a mixture of ‘hard’ and ‘soft’ kill measures (see How to defeat…). 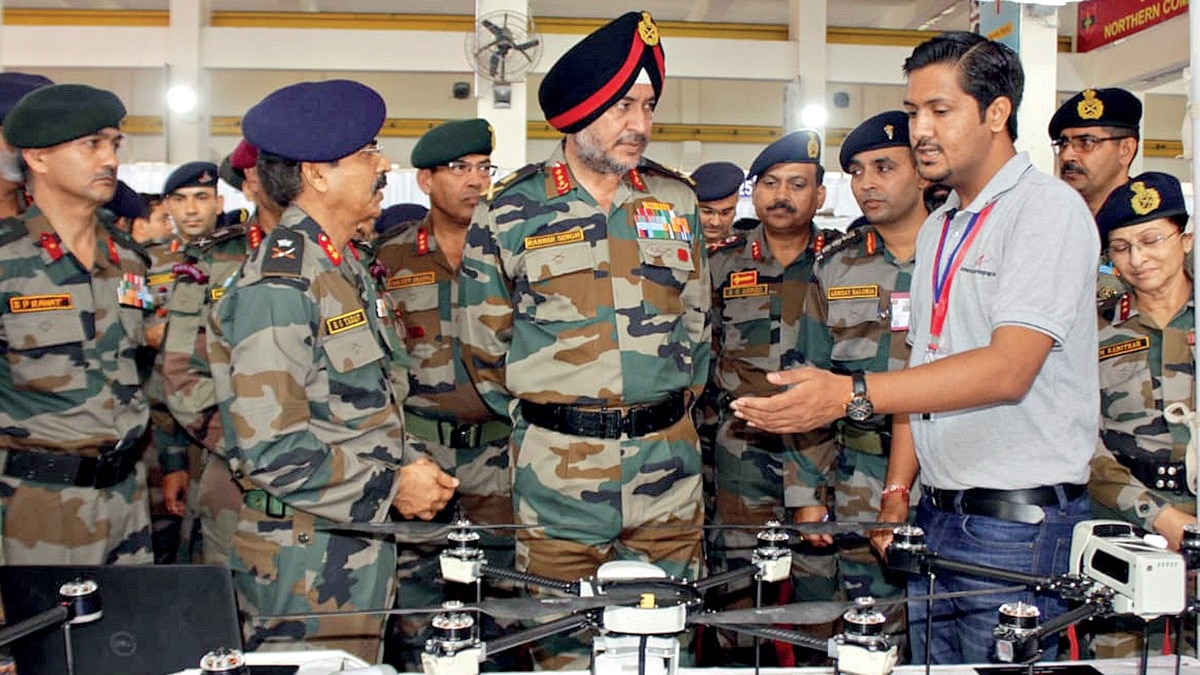 Most of these technologies are deployed in the terminal stage of a rogue drone’s flight path, in the last hundred metres or so, when there is very little reaction time. It would be hard for a defence system to precisely identify a rogue drone’s vulnerabilities and then deploy counter-measures. Experts like Bunkar point out that smart drone technology and counter-technology are escalating too rapidly for effective responses to be brought to bear. “There are currently nearly four layers of counter-measures in drone technology, this will continue to escalate,” he says. So, for instance, if the GPS signals that a drone uses to guide itself to the target are jammed, it could switch frequencies or use visual references as a guide. Jamming an incoming drone’s signal will not work in the case of a drone that is flying ‘silent’, guided by means of pre-fed data coordinates. The trouble with most of these technologies is that there is really no one-size-fits-all. Agencies that have spent millions of rupees in imports have found limitations to the equipment. One security force operating under the Union home ministry in Delhi recently imported a high-powered electromagnetic (HPEM) system. An HPEM system zaps drones with an electromagnetic pulse, causing them to crash-land safely. The security force found it could not deploy this system at airports because of the risk the HPEM posed to incoming aircraft. Deploying them in other crowded spaces ran the risk of HPEM frying the circuitry of other gadgets nearby. Many existing counter-measures will be powerless against a swarm attack-a pack of drones flying into their targets from multiple directions. The next big scare for which there are few answers yet.

Get real-time alerts and all the news on your phone with the all-new India Today app. Download from